The dreamlife of Bombay 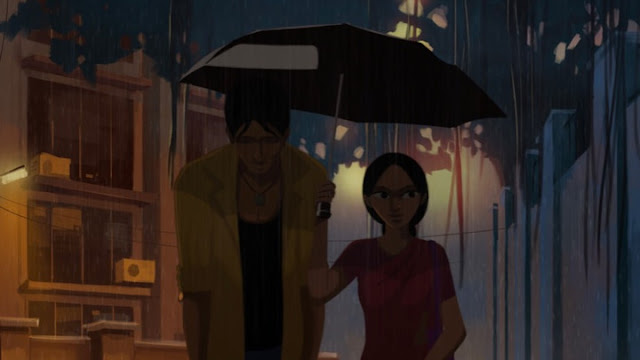 Indian animated features are rare enough in themselves, so a premiere at a major international festival is a huge deal. Shilpa Ranade’s Goopi Gawaiyaa Bagha Bajaiyaa played at the Toronto International Film Festival (TIFF) in 2013. The following year, Ranade’s former collaborator, Gitanjali Rao, had a short film at Cannes. True Love Story looked at the halting romance between two flower-sellers in Mumbai, rendered in a style both earthy and impressionistic.

Rao had always planned True Love Story as a feature. Her efforts of six years will finally bear fruit later this month, when Bombay Rose opens the International Film Critics’ Week, an autonomous section of the Venice Film Festival (28 August-7 September). The film has also been selected as part of the TIFF line-up (5-15 September).

For Bombay Rose, Rao expanded the central romance of True Love Story and added subplots. A single rose becomes a leitmotif linking the stories, passing from an old lady to Salim to Kamala. This expansion also allows her to try out different styles of animation and folk art: Mughal miniature for Kamala’s daydreams; a truck-art aesthetic for Salim’s reveries; a Gothic washed-out look for the old lady’s backstory. “The use of frame by frame painted animation enables me to traverse seamlessly between the real and the dream world," Rao writes in a note on the film. You can see the same approach in her 2015 short, Printed Rainbow, in which a rainy monochrome Mumbai makes way for bright colours and exotic landscapes when a woman enters, Alice-like, the pictures on matchbox covers.

It was a retrospective of Polish animator Jerzy Kucia which opened Rao up to the possibilities of non-commercial animation. Kucia would later have a more direct impact on her career, when Rao attended a workshop by him in Mumbai. She showed her first short, Orange—a fluid, sensuous short quite different from her recent work. “He said, it’s accomplished, but I don’t see you and your surroundings in it," Rao says when I meet her at her apartment in Malad, Mumbai, which she shares with a fluctuating population of cats (there’s a feline in nearly every film she’s made). Kucia’s remark pushed her to develop a style more recognizably hers.

Rao achieved modest fame in 2018 when she played the mother of a comatose girl in Shoojit Sircar’s October. She said the experience helped her break down the acting process for her own work, and made it easier to convey what she wanted to her animators. Like her short films, Bombay Rose was painted frame by frame, on a computer, but this was the first time she worked with a team of more than three. During the busiest stretch, there were about 60-70 people working under Rao—a very small team for a feature animation project, she assures me. I ask if she found it difficult to delegate work. “Not as much as I thought it would be," she says. “We kept two-three months for training, in which I told them the way I look at things. By the end, I was approving scenes and they were saying, let’s work a little more on this."

Rao makes no bones about how her career path has meant making certain life decisions. “For a woman, and then a film director, and an animation director, and an animation director who’s chosen to make a non-children’s film—the sacrifices come in." She quickly adds that though she didn’t want children, opting to dedicate her time to her craft instead, this needn’t always be the case; Shilpa Ranade has two children, she points out, and still managed to make her animated feature. “I have eight cats, though, so my travel has become dicey," she laughs, as her marmalade tabby skitters out of the room.

This piece, a photoessay, appeared in Mint Lounge.
Posted by a fan apart at 3:48 AM