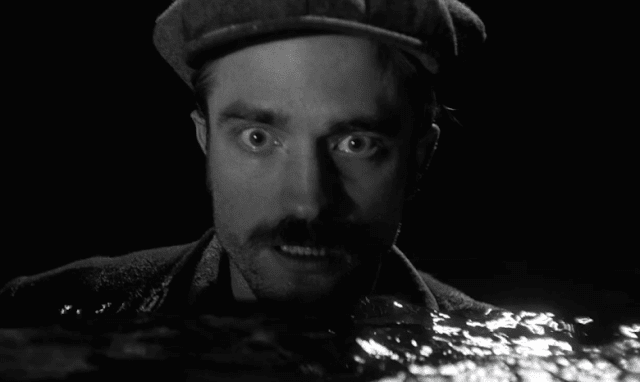 There are moments in The Lighthouse where, if I squinted a bit, I could have sworn the part of Ephraim Winslow was being played by Daniel Day-Lewis and not Robert Pattinson. The Maine lobster fisherman accent adopted by Pattinson for Robert Eggers’ 2019 film about two lighthouse operators in the 1890s somehow brought to mind the menacing oratory of Daniel Plainview from There Will Be Blood. And Pattinson seems to disappear, as Day-Lewis would, into the hulking physicality of his character, grunting, cussing, farting, pleasuring himself and reacting to an aggressive seagull with a panicked decisiveness worthy of Buster Keaton.

It has been an astonishing few years for Pattinson. He broke out as a teen star, first as Cedric Diggory in the Harry Potter films, then as Edward Cullen, the vampire lead of the Twilight trilogy. But as the last of the Twilight films rolled out in 2012, he headed on an unexpected path, starring in David Cronenberg’s sleek, disturbing Cosmopolis. He began working with directors from all over, eschewing anything even marginally mainstream. He also showed a keenness to bury his matinee-idol looks—he spends The Lost City Of Z in a bushy beard and glasses, and ends The Childhood Of A Leader as a skinhead Hitler of sorts. And there were his accents; his Dauphin in the recent Shakespeare adaptation The King has a French accent so extreme, it’s almost a mockery of the lugubrious film it’s in.

What sets post-Twilight Pattinson apart from his peers is the way he has single-mindedly sought out the indie/arthouse space (though Christopher Nolan’s forthcoming Tenet and his casting as Batman should mark some kind of return to the mainstream). Pattinson has also—unusually for an American actor—shown a keenness to work in, and with directors from, other countries. He auditioned for Claire Denis’ High Life, was told he was too young, but persevered until the French auteur cast him four years later. He has worked with directors from Colombia (Ciro Guerra, Waiting For The Barbarians), Germany (Werner Herzog, Queen Of The Desert), the Netherlands (Anton Corbijn, Life) and Australia (David Michôd, The Rover), and even when he is working with American directors like Brady Corbet on The Childhood Of A Leader, the film has a European setting and feel.

Around the time Pattinson was making the jump from mainstream to arthouse cinema, his Twilight co-star, Kristen Stewart, was also headed in a similar direction. First, she worked with Brazil’s Fernando Meirelles on his adaptation of Jack Kerouac’s cult novel On The Road. Then she headed to Europe, collaborating with French director Olivier Assayas. Her performances in their two films together—Clouds Of Sils Maria and Personal Shopper—were revelatory: brittle, original and subtly devastating. It’s altogether fitting that she was cast as Jean Seberg—an American actor who made her most inedible film, Jean-Luc Godard’s Breathless, in Paris—in Benedict Andrews’ Seberg.

Who are the other globetrotting world cinema stars today, actors who work across industries and oceans? The first name on such a list must be Juliette Binoche, whose longevity and fearlessness as a performer has rendered her almost without peer. In the 30-plus years of her career, she has worked with masters from Taiwan (Hou Hsiao-hsien), Iran (Abbas Kiarostami, twice), Japan (Naomi Kawase), several from America and Britain (most memorably in The English Patient and The Unbearable Lightness Of Being), Germany (Michael Haneke, twice), Poland (Krzysztof Kieślowski), and just about every major modern French director. It’s not surprising that both Pattinson and Stewart have found themselves playing opposite her, in High Life and Clouds Of Sils Maria, respectively.

Spanish and Latin American actors have proved particularly good travellers in recent years: Javier Bardem, Penélope Cruz, Maribel Verdú, Diego Luna, Édgar Ramírez. But if there’s one name that brings together different strands of world and popular cinema, it’s the Mexican actor Gael García Bernal. He shot to fame in thrilling, volatile films by then-emerging Mexican directors—Alfonso Cuarón’s Y Tu Mamá También and Alejandro Iñárritu’s Amores Perros. Since then, he has worked all over the arthouse world, with idiosyncratic talents like Jim Jarmusch and Michel Gondry and titans like Herzog and Pedro Almodóvar. His partnership with Chilean director Pablo Larraín in No, Neruda and Ema might be the most rewarding actor-director team-up of the decade. He also managed five seasons of sublime comedy as orchestra conductor Rodrigo De Souza in the American series Mozart In The Jungle.

Acting talent moving across international borders isn’t a recent phenomenon: few working in film today have ranged as far and wide as Michel Piccoli or Max von Sydow. Still, such cross-pollination has been gathering steam since the internet started radically expanding people’s exposure to each other’s cinemas. Golshifteh Farahani’s fame in Iranian cinema has led to her finding work in France (Eden), India (The Song Of Scorpions) and the US (Paterson). Actors like Vincent Cassel, Tilda Swinton, Willem Dafoe and Viggo Mortensen have shown similar exploratory instincts. When Maggie Cheung starred in Assayas’ Irma Vep in 1996, her otherness was at the heart of the film. Today, South Korea’s Kim Min-hee acts alongside France’s Isabelle Huppert in Claire’s Camera, Hong Sang-soo’s Cannes comedy, and it seems like business as usual in the arthouse world.

This World View column appeared in Mint Lounge.
Posted by a fan apart at 5:31 AM