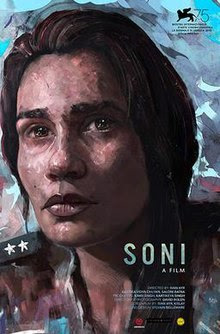 Soni opens with a man following a woman on a bicycle at night, calling after her—a long, unbroken take, as all the film’s scenes are. She stops and confronts him; suddenly, he’s on the ground, she’s slapping and punching him, and there are cops pulling her away. For Indian film audiences fed on violent revenge fantasies, a few seconds of retribution won’t count for much. But Soni isn’t interested in cheap catharsis.

Soni (Geetika Vidya Ohlyan) is part of a Delhi police team headed by Kalpana (Saloni Batra) where she’s sometimes used as a decoy to trap those looking to harm women. That Soni begins the film as a willing pawn is notable, as she later finds herself an unwilling one, grounded from duty when her temper results in a politician’s son being hauled in. At every stage, to the extent that is practically possible, Kalpana has her back, arguing her case with her commissioner husband in office and at home (the latter scene made me think how rare it is to see couples in Hindi films sit in bed and talk).

With low-burning intensity, and without ever slipping into self-congratulation, director Ivan Ayr and his actors examine what genuine solidarity looks like between women in a male-dominated workplace. Soni premiered at the Venice Film Festival last year. It went straight to Netflix in mid-January, disappointing those who had hoped for a theatrical release before streaming. Things have picked up in the last few weeks with Gully Boy and Sonchiriya, but Ayr’s quiet debut is arguably the Hindi film of the year so far.

Working with cinematographer David Bolen, Ayr films his long takes with an unobtrusiveness that allows the viewer to concentrate on speech and surroundings without being distracted by technique. This is a film that lives in its details—of body language, of placement within scenes, of words that sting and disarm. There’s great warmth in some gestures, but Ayr won’t dwell on that kind of release either. Through its own restraint, Soni comments on the restraint its characters must show. When Kalpana tells Soni that Amrita Pritam titled her autobiography Revenue Stamp because she was told that her life story could fit on the back of one, it’s the quietest and most devastating of punches.
Posted by a fan apart at 4:55 AM