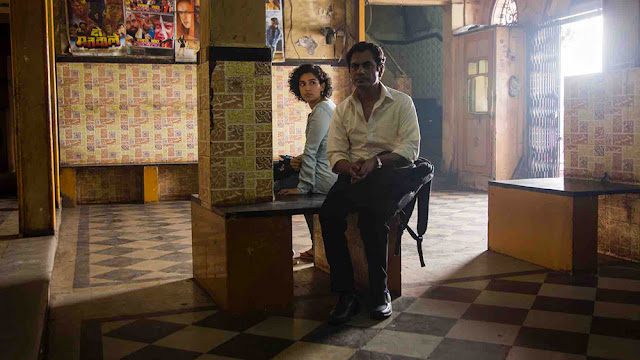 Six years after The Lunchbox, Ritesh Batra returns to Mumbai with another film about two lonely souls. It deals, as his first feature did, with that quintessentially Mumbai feeling of being lost in a crowd, unmoored in a sea of people. Unlike the central characters in The Lunchbox—who were, for the most part, alone in their homes—Photograph’s Rafi (Nawazuddin Siddiqui) and Miloni (Sanya Malhotra) live with actual or makeshift families: she in an expensive-looking house with her parents and siblings, he with four other men in a cramped room near the railway tracks. But even when they’re with company, they remain detached, floating above conversations even as they’re dragged into them.

Rafi is a photographer at Gateway of India. It’s here that he meets Miloni, and convinces her to let him take a photo. Perhaps it’s his melancholic pitch that grabs her. “Years later, when you see this photo, you’ll see the same sunlight on your face, the same wind in your hair, thousands of voices in your ears," he says. “These will all fade away." She leaves without paying him, but they find each other again. He has a strange proposition: Would she pose as his wife for a day? His beloved grandmother (Farrukh Jaffer) had stopped taking her medicines, so he sent her Miloni’s photo and lied that he was getting married. Now she’s coming to Mumbai and he’s short a fake wife.

Surprisingly, Miloni agrees. The two of them meet, first with Rafi’s irrepressible dadi in tow and then by themselves, and a tentative, halting friendship develops. Batra’s touch is anything but tentative and halting; he seemed to emerge fully formed with his first feature, and has only grown surer since. However, there’s a restraint to Photograph that seems closer to artful gesture than to anything meaningful. Malhotra looks pensive throughout. Her feet are lingered on in scene after scene, in a manner that’ll have critics scurrying for meaning (I scurried too, and came up short).

There are long silences. And there’s a lot of repetition, which occasionally goes somewhere (the softy-kulfi bit builds to a nice end), but more often hangs heavy. Photograph reminded me at times of Sofia Coppola’s Lost in Translation: a friendship between an older man and a younger woman, and a narrative that’s in no hurry to get anywhere. Batra really takes his time, which costs the film somewhat—he’s an observant, sensitive director, but not yet a consummate enough stylist to hold one’s attention visually.

It seems unfair to say, what with Siddiqui playing beautifully against type as a gentle romantic, that this film could have done with the Nawazuddin of The Lunchbox as well. In Batra’s first film, the quiet lead performances were offset by Siddiqui’s chirpy presence. Something similar is attempted here with Rafi’s plain-talking dadi and two of his roommates (Akash Sinha and Saharsh Kumar Shukla, both excellent). But there’s no relief in the airless scenes in Miloni’s house, which are either at the dinner table or show her attempts to converse with domestic worker Rampyari (Geetanjali Kulkarni). The film never underlines why Miloni tries to reach out to her, which isn’t surprising—the implication is it’s because she now has feelings for a man whose station in life is closer to Rampyari’s than hers.

Photograph is a film shot through with nostalgia. Part of this is for the Bombay of old: single-screen cinemas, Campa-Cola, tea shops that look like they’ve been around since independence. Old standards like Aaja Re O Mere Dilbar Aaja and Tumne Mujhe Dekha Hokar Meherban waft through the scenes. The couple’s dietary kinks—no soft drinks for her, kulfi at the end of the month for him—are dictated by incidents from their younger days. All of this is in tune with their relationship, which is halting and formal in a way that seems to belong to simpler times. There’s also a fascination with mechanical processes—the groans of Rafi’s instant camera machine as it reluctantly hands out a photograph, the methodical progress of a makeshift soda factory. This is where Batra is at his best, focusing our attention on mundane things and rendering them timeless.

This review appeared in Mint Lounge.
Posted by a fan apart at 5:01 AM