I haven’t felt a stronger urge to walk out of a screening all year than I did during Rock The Kasbah. It wasn’t just the laziness of the writing or the gimmickiness of the set-up. It’s the astonishing condescension on display—the idea that Afghans need Americans to show them how to treat their women right. Rock The Kasbah wants to win hearts and minds, which makes it a lot more offensive than some blockheaded action movie in which wild-looking 'Arabs' chop off heads and say “infidel” a lot. It even climaxes with a teary performance of "Peace Train", perhaps forgetting that the author of the song had once demanded the very un-peaceful end of Salman Rushdie.

Rock The Kasbah takes a while to become truly offensive; initially, it looks set to be another fish-out-of-water Bill Murray comedy. Murray plays Richie Lanz, a washed-up rock tour manager in California. In desperation, he books his client, Ronnie (Zooey Deschanel), on a United Service Organizations tour to entertain the troops in Afghanistan. There is some comedy in the way Deschanel’s panic bounces off Murray’s fake cheer, but when she runs out on him—and out of the movie—things begin to spin out of control. The spiral intensifies when Richie is floored by a Pashtun girl’s singing and decides to book her on the American Idol-like TV show Afghan Star. 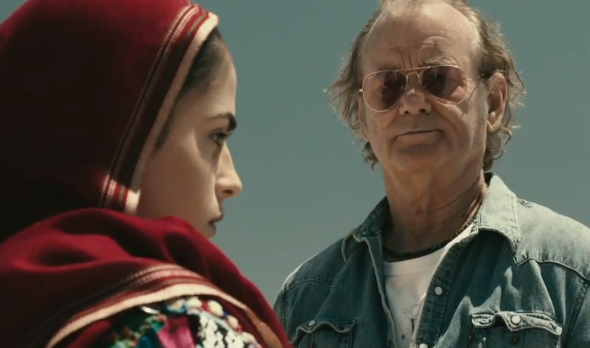 This film is dedicated to Setara Hussainzada, who angered traditionalists when she danced without a hijab on Afghan Star in 2007. Rock The Kasbah takes her story and turns it into a mess of stereotypes. Salima (Palestinian actor Leem Lubany) can’t just be any regular oppressed girl, she has to be the daughter of a warlord. And it has to be the American agent who emancipates her, who has the great wisdom to write off the studio audience’s cool reaction to her with: “They want to go with her. They just can’t go with her because they’re in a group.”

You just know that there’s a certain level of uncaring—and an assumption of audience ignorance—when an Afghanistan-set film is called Rock The Kasbah. Richie’s daughter actually points out that kasbahs are mainly associated with African countries, but that’s the film’s title anyway, not just because it’s a Clash number but because director Barry Levinson probably feels the viewer won’t know, or won’t care. The only thing more depressing than the horse-and-warlord clichés and the moralizing is Murray’s commitment to this rubbish, whether it’s warbling "Can’t Find My Way Home" in the shower or deadpanning, “Well, that’s wartime”, when an army man finds him tied to a bed wearing lipstick and a blond wig.

This review appeared in Mint.
Posted by a fan apart at 4:10 AM