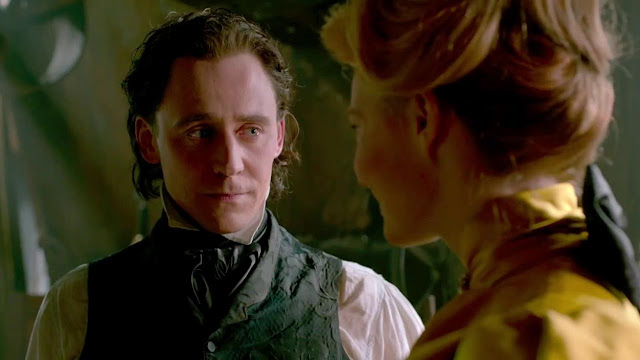 Crimson Peak is a strange mix of gothic romance, horror film and, in its frenetic last moments, giallo. It’s yet another advertisement for Guillermo Del Toro’s supreme visual imagination, something that’s informed all his films, whether big-budget Hollywood (Hellboy and its sequel; Pacific Rim) or more personal projects like Pan’s Labyrinth. Yet, too often, one gets the feeling of being haunted not by ghosts but by tropes. Everywhere you look, there’s an old standard waiting to be identified: the haunted house on the moors, the dour landowner with a shady past, the supremely creepy, piano-playing sister who keeps forcing people to have tea (okay, that one’s new).

The film’s opening is reminiscent of Pan’s Labyrinth: a brief glimpse of the mortally injured protagonist before we’re shown the rest of the film in flashback. “Ghosts are real. This much I know,” Edith Cushing (Mia Wasikowska) tells us straight off the bat. And she means it: The very next scene is Edith being visited as a young girl by her dead mother’s spirit, who isn’t very comforting. The film then jumps forward a few years. Edith, in the process of writing her own ghost novel, is an American Elizabeth Bennet of sorts: quick-witted and outspoken. It’s only right that a Darcy show up, and soon enough we get Thomas Sharpe (Tom Hiddleston), an English baronet who’s trying to get Edith’s father to fund his clay-extracting machine.

Thomas isn’t charming in the conventional sense but Edith finds his vampirish gloom and his obvious interest in her attractive. In due course—and with every possible warning thrown at the viewer—they marry and she travels with him to his crumbling residence on the Cumberland moors. The house itself is a creepy marvel, with dimly lit corridors, creaky doors, a hole in the roof, red clay oozing from the floors. Yet, the ghosts that Edith begins to encounter are—by Del Toro’s standards, at least—disappointingly one-note: shrieking, personality-less collections of blood and viscera. So are the horror-movie effects—the ball bounced back by an unknown presence in another room; silence followed by orchestral shrieking.

As Edith begins to understand the connection between the mysterious Thomas, his over-close sibling Lucille (Jessica Chastain) and the apparitions, the film whips itself up into a frenzy, until it passes out of the range of gothic horror and enters the domain of giallo. It’s a bold move—I quite enjoyed the Grand Guignol of the last 15 minutes—but viewers may be a little perplexed at the sudden shift of genre. They may also grow tired of seeing so many borrowed ideas, taken from films like Notorious, The Innocents and The Cement Garden, and from an assortment of gothic novels. Still, even if it doesn’t cohere or surprise much, there’s enough pure style in Crimson Peak to keep you hanging on.

This review appeared in Mint.
Posted by a fan apart at 8:02 AM