It’s unlikely anyone will be going in with measured expectations to see Chaitanya Tamhane’s Court. For months, there have been articles and op-eds praising the film’s originality, deconstructing its motives. There have been interviews with the director, producer, cinematographer, even distributors and sales agents. Looked at one way, it’s great that a film like this—an indie with a snowball’s chance in hell of a release—has any kind of hype surrounding it. Yet one has to wonder: Is the actual film likely to resemble the one viewers have built up inside their heads?

Don’t get me wrong. I think Court is absolutely worth raving about, and that it might be one of the most original films to come out of the country in a long time. But its insights are hard-won: You have to be willing to wait and watch until the point of each scene—and there is always a point—reveals itself. Most of the scenes look like someone just switched on a camera and recorded whatever quotidian scene was unfolding. Do not be fooled—even when you’re watching someone doze off or shop or sit in silence, there’s a reason.

Court revolves around the trial of one Narayan Kamble (Vira Sathidar), a man of few words and a singer of transformational power. The case against him, as his lawyer, Vinay (Vivek Gomber, also the film’s producer), finds out, is that he abetted, through one of his performances in a Mumbai slum, the suicide of a local sewer worker. The public prosecutor, Nutan (Geetanjali Kulkarni), points to evidence of suicide, but also to Kamble’s earlier hearings for sedition and suggests links to anti-national groups. 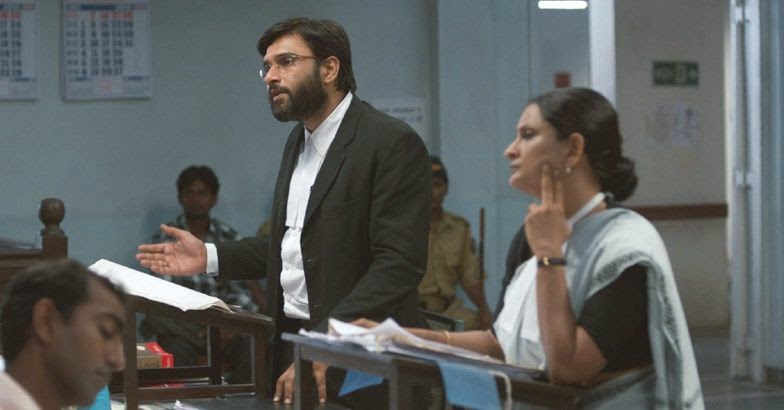 The film draws on the real-life experiences of singer-activists like Sambhaji Bhagat, whose musical numbers are featured in Court, and cultural groups like the Kabir Kala Manch, whose members were charged under The Unlawful Activities (Prevention) Act. One realizes after a while that Kamble isn’t guilty, that the worker died because it is terribly dangerous work carried out with minimal safety precautions. And that’s when the film becomes less about the case than the court and the people who populate it.

By following the main players—the two lawyers and the judge (Pradeep Joshi)—home from work, as it were, Tamhane reminds us that concepts like “justice” and “equality” derive from the people that work within the system, and that these people have prejudices and blind spots just like the rest of us. Vinay, a well-to-do bachelor, is visibly passionate about the law, speaking at seminars and going out of his way to help the taciturn Kamble. He can afford to be idealistic in a way that the more middle-class Nutan can’t. When she goes home, she has to cook, run a household and study her casebooks; Vinay can have a drink and fall asleep in front of the TV. One particular contrast is devastating. At one point, Nutan and her husband and children watch a xenophobic stage comedy (and enjoy it). Later in the film, Vinay finds himself a victim of similar small-mindedness, manifested as a kind of street theatre.

Court observes its characters minutely but never judges them, and Tamhane finds a filmic grammar that matches this attitude. Most of the scenes are shot with a static camera. Cinematographer Mrinal Desai, who uses his background in documentary film-making to give the film a very convincing naturalism, sticks mainly to medium and long shots. In this age of fast cutting and hyperactive camerawork, stillness of this kind is almost jarring. Though many of the scenes are as formally brilliant—and difficult to execute—as a flashy Steadicam shot, the audience’s willingness to embrace the lack of movement may determine how long the film can extend its theatrical run. Court has already had a great run on the festival circuit. It would be very exciting if regular film-goers took to it as well.

This review appeared in Mint. An earlier piece I'd written on the film's global journey.
Posted by a fan apart at 12:09 AM