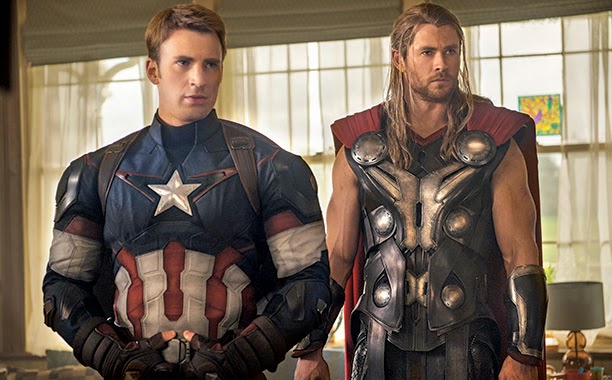 How many Avengers is too many Avengers? In the first movie, at least one superhero seemed superfluous: Jeremy Renner’s Hawkeye, whose bows and arrows seemed silly when placed alongside the physicality of the Hulk (Mark Ruffalo) and Captain America (Chris Evans), the superpowers of Thor (Chris Hemsworth) and Robert Downey Jr’s Iron Man (Black Widow might have been superfluous too, only it's Scarlett Johansson). Hawkeye even became the subject of a Saturday Night Live sketch, and director Joss Whedon, ever attuned to the shifting winds of pop culture, has turned Hawkeye’s non-importance into a running gag in Avengers: Age Of Ultron, the sequel to 2012’s The Avengers.

He may be a joke, but Renner’s still very much there, putting in the hours, earning his pay cheque. So is everyone else. You have the six Avengers. You have a new villain, Ultron. There are the super-siblings, Quicksilver (Aaron Taylor-Johnson) and Scarlet Witch (Elizebeth Olsen), who seem to have wandered in from an X-Men movie. There are superheroes no one really cares about (War Machine, The Falcon). And there are the appearances—so dear to fanboys, so perplexing to regular viewers—by sundry characters from various corners of the Marvel Universe (Erik Selvig, Peggy Carter).

With so many characters to keep track of, the narrative could have become ridiculously convoluted, but Whedon avoids this by trimming his plot of any complexity. At a Hydra base the Avengers overrun in the fictional country of Sokovia, Iron Man comes across some advanced research on artificial intelligence. Informing Bruce Banner but not the rest of the team, he tries to harness this power to activate Ultron, a planned defence shield of sorts. As anyone who’s ever read a comic knows, when you mess with science, you get a supervillain. Sure enough, Ultron comes to life as a killer-bot, and in James Spader’s even tones, declares that his mission is to save humanity (by killing everyone).

Whedon does all he can to keep the various balls in the air. And, to an extent, he succeeds—but there’s something missing. The Avengers worked because Whedon brought something of his wisecracking screwball personality to the genre, which was then in its dour, Nolan-inspired phase. But the action sequences in Age Of Ultron are interminably long, and the banter has lost a lot of its bite; there’s something depressingly Ocean’s Twelve about watching Hulk, Iron Man et al try and lift Thor’s hammer at a party.

It’s disappointing to see a director as playful as Whedon—the creator of Buffy The Vampire Slayer and Firefly—resist the chance to mess with Hollywood formulae. Age Of Ultron unfolds like every other comic book sequel you’ve seen: an opening battle, victory, complacency, cracks within the team, a “back to the basics” speech, rebuilding, and a final battle that decides Earth’s fate.

There is some fun to be had. The odd verbal jab hits home (Captain America has loosened up), Spader’s voice work is terrific, and two Avengers are contemplating the most ill-advised workplace romance ever. But the best you can say about the film is that it’s efficient. It certainly isn’t inspired.

What next for Whedon and his all-stars? Guardians Of The Galaxy stole the wise-ass superhero template; Ant-Man is likely to push in the same direction. TV’s Daredevil is bringing Raid-like grittiness to the form. Will the Avengers movies to come be of anything more than academic interest—how many millions spent, how many made? And if they aren’t, will Whedon become a cautionary tale: the talented showrunner whom Hollywood threw money at and ruined?

This review appeared in Mint.
Posted by a fan apart at 12:13 AM

Good review. It's still fun. However, by now, I am starting to feel a little winded with all of these superhero flicks. Especially now that they seem to be a lot like the others that come before them.