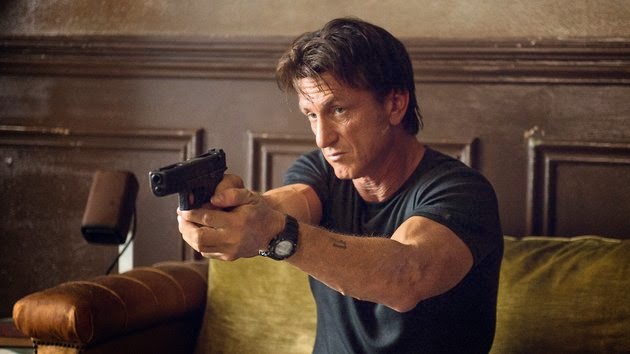 A few pages into The Prone Gunman, Jean-Patrick Manchette, French author of several popular série noires in the 1970s and early 1980s, describes an assassination. “At the discreet sound of these shots, the redhead turned. Terrier also turned, and they found themselves face to face just as Dubofsky’s head, which was split open, full of holes, and shattered like the shell of a hard-boiled egg, hit the sidewalk with a squishy sound.” Fiction doesn’t come much pulpier than that.

The Prone Gunman is a movie now, minus the ‘prone’ and much of the pulp. Pierre Morel’s The Gunman takes Manchette’s story of an assassin who wants to retire and tries to graft it onto a real-world template. Gone is the Hammett-like cool of the book; Morel’s film is overwrought, reaching for gravitas even as its plot never moves beyond the generic. Jim Terrier (Sean Penn) has a night job as a hitman for a conglomerate with interests in Congo. He’s ordered to assassinate a mining minister there, and though he appears to be having second thoughts about his choice of career, he carries out the murder. He then disappears as per orders and retires from the killing business. Eight years later, he finds that he’s become a target, a fly in the ointment for former partners who are now businessmen and want their dirty pasts erased.

A politically minded director such as Paul Greengrass might have been able to balance the real-world politics of corruption in the African mining industry and the constraints of the hunter-becomes-the-hunted genre movie. But Morel has never shown signs of being anything more than a capable action director. Before directing Liam Neeson in Taken (2009) and John Travolta in From Paris With Love (2010), he made a splash in his native France with District 13 (2004), a film that used parkour—the art of free running—to great effect in its supercharged action sequences. He has an eye for intricate setups, for textures and movement; his partnership with cinematographer Flavio Martinez Labiano is the best thing about The Gunman.

Penn, as he often does nowadays, clenches his facial muscles into a mask and grinds his words out. This might pass muster as pro forma tough guy action movie acting, but anyone who’s known the levels of surprise the Penn of old could bring to almost any role will probably heave a sigh watching him here. The entire cast is better on paper than on screen, really: Javier Bardem has an indulgent cameo as Terrier’s former partner, Ray Winstone is wasted and Idris Elba has very little reason for being in the film. Only Jasmine Trinca, as Terrier’s former flame, shows some fire, though her character exists mainly to be rescued and to make Terrier out to be something less than a cold-blooded killer.

The Gunman isn’t a bad film per se, but it can’t decide whether it’s a generic thriller and a story about people with real emotions living in the real world. It isn’t even the best movie about an assassin by a director named Pierre. That honour goes to Jean-Pierre Melville’s Le Samouraï (1967), a film that isn’t given to excessive wringing of the hands, a quality most unseemly in professional hitmen.

This review appeared in Mint Lounge.
Posted by a fan apart at 2:07 AM