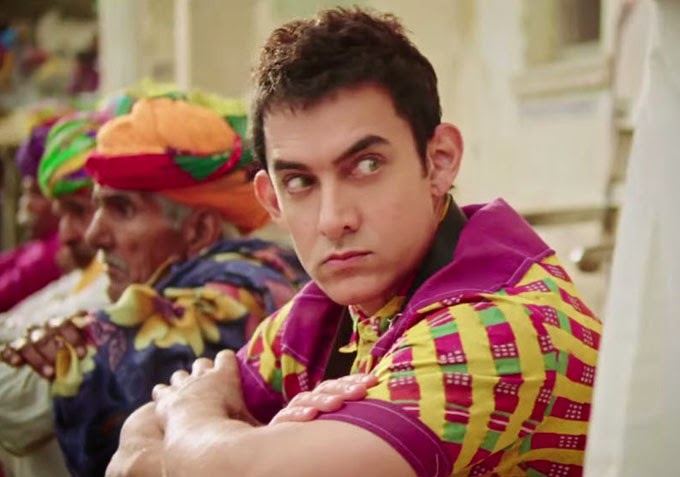 It begins as all good movies do, with a spaceship hovering over a desert and a naked man clutching a transistor radio. The man, or rather, the alien, will go on to assume the name PK; he's played by Aamir Khan, whose protruding, otherworldly ears must regard this as destiny fulfilled. By the time TV news reporter Jaggu (Anushka Sharma) comes across him, he's acquired clothing and a Bhojpuri accent. He tells her his story, and she shelves her skepticism about his interplanetary origins quicker than one might have thought possible. From then on, it's a search for the locket that'll allow him to contact his home planet. Oh, and along the way, Rajkumar Hirani solves religion.

In his last film, 3 Idiots, Hirani used Aamir Khan's character Rancho to point out the soullessness of our education system. PK is more of the same: Rancho has been replaced by another outsider, and education by organised faith. Hirani and his co-writer Abhijat Joshi would have you know that religion, especially in its enterprise form, is based on fear, that it's exploitative and drives a wedge between regular people (presumably the film's audience). Few sane minds will argue with this, and that's the problem: the film's main thrust really isn't news. But it's breaking news in the movie, which just makes its makers look naïve.

Unfortunately (for me, not for Hirani), this seemed to be a minority view. The audience I saw the film with chuckled when PK attached stickers of gods to his cheeks to avoid getting slapped. They roared when he told godman Tapasvi Maharaj (Saurabh Shukla) that his messages weren't getting through to God because he has a "wrong number". And they looked visibly moved when he staggered around an idol shop, praying to be sent home. After a while, I began to feel like I, not PK, was the alien — removed from the populace, observing them, taking notes.

Hirani is one of the smartest filmmakers in the country, and it's killing his films. No director has a better grip on the viewer's jugular, or a better sense of when to go for the kill. A flagrant example is the scene where he stages one of the most unnecessary bomb blasts in recent Hindi film. Nine out of 10 directors would have milked the shock by adding voices on the soundtrack. Hirani, instead, opts for a Mukesh number, and it's mesmeric. In its programmatic brilliance, the scene reminded me of the suicide in 3 Idiots — so manipulative, yet so well-executed.

Hirani's eye for colour and eccentricity is intact. There are sequences that work precisely because they're so strange, like the one where PK accosts a terrified blue-skinned Shiva in a public toilet. But Hirani's tendency to explain things that really don't require explication is a drag; only his first film, the blithe Munna Bhai M.B.B.S, was free from this. It's a high-wire act — his films, with all their debunking, make the audience feel smart, but he's really treating them like children, telling them how they ought to feel. The soundtrack does much the same, pouring syrup over anything faintly emotional.

It's staggering how well this film fits into the ongoing reality show that is Aamir Khan. When he's on Jaggu's show, tears streaming down his face, he might as well be hosting his own Satyamev Jayate. He's beyond acting now, he's into righting wrongs (as, quite sadly, is Hirani). His performance here is something for sure — but is it something worth commending? With his shuffling walk, flailing limbs and perpetual bug-eyed expression, he offers up a tour de force of mugging for the camera. There was an audible sigh from my friend when Khan said "Sarat manjur hai"; he'd uttered the same words all those years ago in Lagaan. The Aamir of today may as well be an alien for all the resemblance he bears to the Aamir of Lagaan.

Manipulation of an audience's emotions is an integral part of cinema. The trick is to somehow keep them from seeing the wheels turn. If you can figure out how the magician achieved the illusion, it isn't magic at all. PK professes to expose manipulators, but its own visible efforts at manipulation undercut its authority.

This review appeared in The Sunday Guardian.
Posted by a fan apart at 10:58 PM