If The Good Road lived up to its premise, who knows how it might have turned out? As it stands, India’s entry for the 2014 Oscars is an intriguing idea that’s executed, for the most part, only passably well. A young boy is separated from his parents while journeying through Kutch, and is picked up by a trucker duo carrying contraband. The manner in which this scenario is achieved is less than plausible. How likely is it that a mother and father might drive for several miles without realising their child isn’t in the car?

Once young Aditya is with the truckers, the film splits into three narrative strands: the boy’s journey with his reluctant guardians; his parents’ (Ajay Gehi and Sonali Kulkarni) frantic search; and a third storyline about a young girl who’s trying to get from Bombay to her village, but who instead finds herself at a supremely creepy rural brothel. There’s no particular reason for this last story strand, except to introduce unnecessary contrasts between the well-adjusted city boy who, predictably, brings out protective instincts in the taciturn truckers, and the poor girl who can’t seem to get a break. 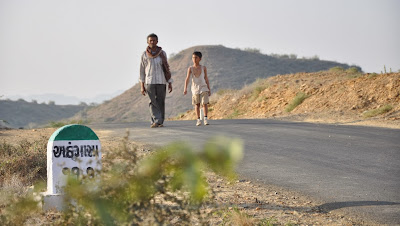 The Good Road is dialogue-light, and Correa and his crew – cinematographer Amitabha Singh, sound designer Resul Pookutty – fill in the silences with a few moments of stark beauty. The director also has an eye for the idiosyncratic image – like a man perched on a milestone like a bird, smoking a beedi –which helps distract from the dullness of the script. I found myself thinking back to Mrinal Sen’s 1969 Bhuvan Shome, another city-meets village film set in Kutch. Sen’s film was as high-art as Correa’s, but it also had humour and pace; qualities The Good Road is sorely lacking in.

If The Good Road didn’t make a late-innings veer towards the sentimental, it might have ended up somewhat like the elliptical American road movies of the ’70s. Instead, abstractness and sentimentality collide in a dialogue exchange in the film’s final moments. “It’s a big country with many trucks and many highways”, one driver says. “Boss, I will never be able to forget this boy”, his partner replies. If it needs to be spelt out, the battle’s already lost.
Posted by a fan apart at 1:01 AM