Two Gujju households, both alike in dignity. In rural Kutch, where we lay our scene. It’s the Romeo and Juliet remake you didn’t know you wanted.

It makes sense that Sanjay Leela Bhansali would pick this particular Shakespeare play. Romeo and Juliet is melodramatic, colourful and full of grand gestures – things that get said about every Bhansali film, good or bad. If you think Baz Luhrmann’s 1996 version was over the top, wait till you see what Bhansali has in store.

The Saneras and the Rajadis have been fighting for centuries, which is quite believable, since all they do in the film is make elaborate threats to wipe each other out. Our star-crossed lovers are Ranveer Singh’s Ram, from Team Rajadi, and Deepika Padukone’s Leela, from Team Sanera (Ram-Leela! Get it?) They fall for each other, do the mandatory balcony scene, elope. They’re tracked down, of course, and from there it’s just a matter of time – an hour and a half more – before they do what’s expected of them.

Bhansali, as is his wont, starts out in third gear, shifts to fifth, and keeps it there for the rest of the film. There are moments when the melodrama is so heightened you’re carried along by the sheer hysteria of it all. There’s little that Bhansali won’t try – Leela’s mother chopping her daughter’s finger because she won’t take off Ram’s ring is almost Shakespearean in its ridiculousness. 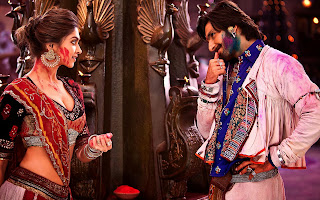 Whoever wrote the pre-credits message claiming that no peacocks, living or dead, were used in the film obviously wasn’t taking into account Ranveer Singh’s performance. Singh, with a six-pack so defined it looks like it’s made of plastic, plays every scene like he’s been smeared with chilli powder, grimacing and seething and biting everyone’s head off. Padukone, wisely keeping to a lower key, is much more effective, especially in the first half, where she’s the most forward Juliet since Parineeti Chopra in Ishaqzaade. Gulshan Devaiah and Richa Chadda get little to do, though Supriya Pathak is mighty scary as the leader of the Saneras.

Though the sheer visual bombast can get wearying after a while, there’s no denying that Ram-Leela is an attractive-looking film. The director’s cinematic eye is as attuned to colour and flash as ever, but there’s nothing compelling happening underneath the surface. As has become customary, Bhansali the stylist passes the baton to Bhansali the storyteller and watches in frustration as he drops it.

This review appeared in Time Out Delhi. Could have been better. So could the film.
Posted by a fan apart at 3:55 AM