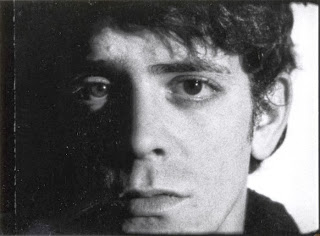 “I’ll be your mirror
Reflect what you are, in case you don’t know”

Lou Reed, who died earlier this week from liver disease, didn’t just write these lines. He lived them. Throughout his 50 odd years in music, he held a mirror up to those who rarely got a second thought – Jacks in corsets and Janes in vests, the twisted and unkind. From 1965 to 1970, he fronted one of the most uncompromising bands in rock history. Brian Eno once said that while only a handful of people bought the first Velvet Underground album, those who did went out and started their own bands.

Nothing prepares you for the first time you hear The Velvet Underground & Nico. After the deceptive calm of “Sunday Morning”, “I’m Waiting for the Man” literally pounces on you; Sterling Morrison hacking away on rhythm guitar, John Cale comping furiously on piano, Maureen Tucker banging on the tom-toms, Reed unleashing stinging curlicues on guitar and singing about meeting his connection. All hell pretty much breaks loose after that. “Venus in Furs” talks about “the whip, in love not given lightly”, and I have vivid memories of hearing “Run Run Run” for the first time and wincing when Reed’s guitar made that horrible screech after the second chorus. Two tracks later, there’s “Heroin”, after which nothing’s ever the same again.

Reed’s work with the Velvets – singing, playing lead guitar and writing all the songs – would be enough to earn him a place in history. Yet, after the band dissolved, he began a solo career which resulted in 22 studio albums. Neil Young aside, there isn’t another artist who, after leaving a seminal band, went on to have a career this productive and unpredictable. In 1972, he released Transformer, which spawned the unlikely hit “Walk on the Wild Side”. (David Bowie, who produced the album, said that Reed’s earlier work “gave [glam rockers] the environment in which to put our more theatrical vision”.) Three years later, he dropped Metal Machine Music, 64 minutes of vocal-less guitar feedback, on an unsuspecting public. Having lost a majority of his audience, Reed proceeded, over the next four decades, to reel them in and lose them again, with records ranging from the commercial (Mistral) to the personal (New York) to the far-out (the Edgar Allen Poe-inspired The Raven).

“I want to be a singer like Lou Reed,” sang Frank Black of The Pixies. He wasn’t the only one – and yet, by conventional standards, Reed’s voice was singularly unimpressive. His delivery was flat, deadpan. When he got excited, he emitted the odd gurgle or yelp, but most of the time there was just this dry monotone. Luckily, Reed was the right singer for the kind of songs he wrote. It’s difficult to imagine his streetwise lyrics being ‘sung’ instead of narrated, as Reed would invariably do. The flatness of his tone also meant that the tiniest of inflections – the way he stretches the word ‘street’ in “There She Goes Again” – were magnified. And if his voice was a limited instrument, Reed’s guitar playing had boundless range and daring: hear his skittering runs on “European Son”, the gentle noodling on “Stephanie Says”, and the muscular stomp of his cover of Bob Dylan’s “Foot of Pride”. Even Hendrix didn’t do as much to legitimise noise in popular music.

Reed’s greatest legacy, though, was the way he broadened rock’s vocabulary. He wrote about shooting up and going down, gender confusion and S&M. The subject matter was sordid, but the tone was non-judgemental, reportorial. It was part-Genet, part-Burroughs; “gritty in the way New York streets were gritty,” as Sonic Youth’s Lee Ranaldo put it. But Reed had a romantic side as well, searching for salvation in music (“Rock & Roll”), companionship (“Perfect Day”) and his city, New York (“Dirty Blvd.”).

Unlike Dylan, always at the forefront of whatever was breaking, Reed was usually ahead of the times. Three years after VU folded up, the New York Dolls took their down-and-dirty aesthetic and ran with it, paving the way for punk rock. Metal Machine Music was seen as an elaborate joke in 1975, but it’s easy to draw a line from it to the feedback arias of Sonic Youth and My Bloody Valentine. Reed was also one of the first songwriters to write frankly about gay and transgender subjects, making him a forerunner of glam rock. He remained unpredictable till the end – collaborating with Metallica, vigorously defending Kanye West’s Yeezus.

Though he was no actor, one of my favourite Reed moments is from a 1983 film called Get Crazy. Reed cameos as a version of himself, an ‘anti-social recluse... dropped by six record companies’. In one scene, he walks straight into traffic while trying to work out a lyric. This remains my abiding image of Reed – boldly striding forth, his music connected to the streets, ignoring the criticisms of passersby. 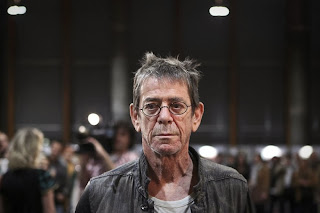 This piece appeared in The Indian Express.
Posted by a fan apart at 1:57 AM