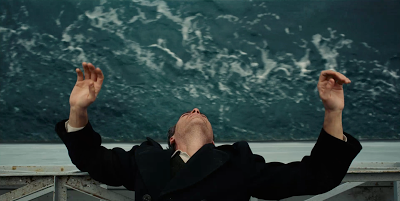 When Paul Thomas Anderson’s The Master released in theatres earlier this year, it received a couple of unnecessary – if predictable – cuts. A lovemaking scene was removed, giving the film an entirely different ending; further, the apparently depraved image of a breast made out of sand was blurred, as were the offending bits in a song sequence where the onlookers are naked. Still, that’s a comparatively elegant solution compared to what the India edition DVD of The Master does to the scene. It is missing in its entirety – which makes the subsequent scene in which Amy Adams scolds and pleasures her husband at the same time even more perplexing.

This singing husband is Lancaster Dodd (Phillip Seymour Hoffman), leader of a Scientology-resembling ’40s cult and mentor to a troubled ex-navyman called Freddie Quell (Joaquin Phoenix). Freddie, who has no discernable aim in life besides making alcoholic concoctions so potent they’re borderline poison, quickly falls under Dodd’s spell. He becomes a willing subject for Dodd’s psychological experiments, never pausing to question if his leader has any idea what he’s doing.

Even if you feel that this film is a little too satisfied with its own vagueness, you’ll find your resistance tested by cinematographer Mihai Mălaimare, Jr’s gorgeous images (shot in 65mm) and Jonny Greenwood’s dissonant score. The Master isn't close to Anderson’s best work; his control has increased since the days of Boogie Nights and Magnolia, but he's mislaid (or deliberately parted with) the forgiving humour of his earlier films. Still, The Master is an abidingly strange film, filled with marvellous performances – not only from Hoffman, Phoenix and Adams (all nominated for Oscars), but also the many actors in walk-on parts; especially Christopher Evan Welch as a rare critic of Dodd’s, and W Earl Brown as an irate department store customer who looks too much like Hoffman for it to be a coincidence.