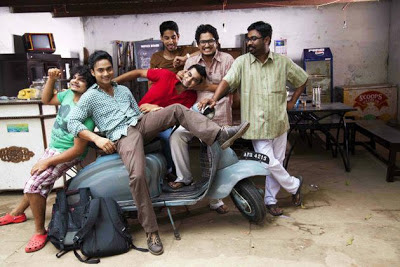 If you’ve ever lived in a college hostel, chances are there’s been a moment when your roommate has looked blearily into your eyes and said, “You know, we should make a movie on our time here.” (It’s between you and your conscience whether the response was “Hell yeah!” or “You should really stop drinking”.) Still, if one of those thousands of unrealised films actually got made, it would probably look a lot like Mere Haule Dost, which reduces college to a never-ending series of courtship rituals and paints its unremarkable protagonists in a very flattering light.

Mere Haule Dost, directed by debutant Nitin Raghunath on a visibly small budget, looks at one summer in the lives of five college-going layabouts in Hyderabad: Dada, Mota, Bheja, Bong and Paisa. There isn’t much by way of plot – the boys mooch about, chase girls, make plans to participate in a Himalayan mountain bike rally, and get roughed up in some of the fakest fight scenes in cinema history. “Haule” means “crazy” in Hyderabadi parlance, but this careful, inert film seems scared to reach beyond the commonplace.

The film does fall within a sub-sub-genre of Indian cinema – the Hyderabad-set shoestring indie. The trend started in 1998 with Nagesh Kukunoor’s Hyderabad Blues, a touchstone of sorts for DIY films in the country. There was also Kuntaa Nikkil’s The Angrez (2006), a film whose grasp of local Hyderabadi patois made it a YouTube favourite. Mere Haule Dost tries hard to be hip and loose-limbed like these films, but the actors never seem at ease, and the silences between their line readings hang in the air like unspoken cries for help. The female members of the cast are reduced to objects of affection and mojo-stealing harpies. There is exactly one moment of invention and beauty – a character on a bike attempting to steal cotton candy off the bicycle moving alongside.
Posted by a fan apart at 5:04 AM