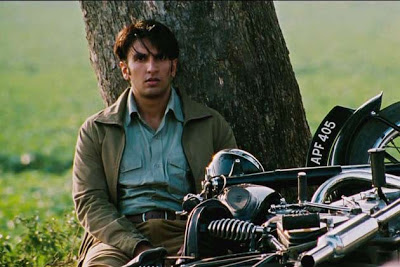 O Henry’s short story “The Last Leaf”, published in 1907, is about a young artist with pneumonia who’s convinced she’s dying. What’s more, she believes that her final breath will coincide with the falling of the last leaf from the tree outside her window. Her downstairs neighbour, a painter, finds out about this and engineers a solution at once simple and brilliant. It is, as one might expect, a sad tale, though not a morbid one.
Vikramaditya Motwane takes more than this one leaf out of O Henry’s book. Not only does he subtly weave this story into the fabric of his second film, Lootera, he also manages that very O Henry-esque trick of making the actions of his characters, however misguided they might be, seem inevitable. And because the characters cannot help themselves, we do not judge them for it. Their missteps become ours.
The film opens in Manikpur, a village in West Bengal. It is 1953: Dev Anand is the big draw at the box-office, electricity is still making its way to the countryside, and the practice of zamindari is on its way out. This last development will soon make life difficult for a local zamindar (Barun Chanda). As of now, however, his only worry is the well-being of his daughter Pakhi (Sonakshi Sinha), prone to extreme shortness of breath. And even her future seems secure when Varun (Ranveer Singh), a polite young archaeologist who’s been digging on the outskirts of the zamindar’s land, asks for her hand in marriage.
The first half of Lootera passes like a dream. In the three years since his debut Udaan, Motwane has become a remarkably assured filmmaker. He elects to show the steady infatuation of Varun and Pakhi not as a scored montage – Bollywood’s favourite new cheat code – but as a series of short scenes that seem to melt into each other. (The editor, Dipika Kalra, also worked on Udaan.) Yet, as the two fall for each other in halting, reserved, ’50s style, there are little hints that things might unravel. Varun’s friend reminds him of a certain cold-hearted uncle. The zamindar’s family heirlooms are taken away abruptly by a government official. And there’s that title – lootera, thief.
It isn’t much of a surprise – though you can skip to the next paragraph now if your tolerance for spoilers is low – when it’s revealed that Varun and his friend are conmen. Once they make away with the zamindar’s riches, the scene shifts to Dalhousie, where Pakhi is now wasting away, her father dead, her cough diagnosed as tuberculosis. Motwane then plays his one “Of all the gin joints” card and throws Varun back into her life. He’s there on a job again; this time, however, police officer KN Singh (Adil Hussain) is on his tail. The dream is over – the visuals are stark now, the colours muted, the stately progression punctured by bursts of action and drops of blood.
If casting Ranveer Singh and Sonakshi Sinha in a period drama seemed like a bold move initially, it’s unlikely anyone will question that decision now. Singh, best known for playing loud, sarcastic rakes, finds a Ripley-like mixture of shyness and cruelty in Varun. And Sinha – on nobody’s radar as a serious actress – is a revelation as the wilful Pakhi. Motwane finds poetry in their small and large gestures, and layers these with Amit Trivedi’s music, Mahendra Shetty’s rich cinematography and Anurag Kashyap’s dialogue. Everything comes together beautifully. It’s only halfway through 2013, but Lootera’s going to be the one to beat.
A version of this review is on the Time Out Delhi website.
Posted by a fan apart at 10:31 PM