Filmish: A Graphic Journey Through Film 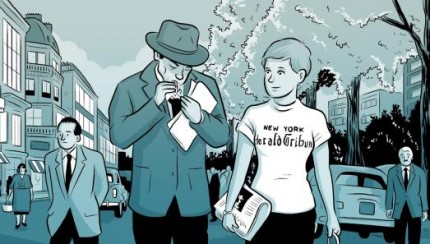 One of the notable innovations in recent film criticism has been the advent of the video essay. You’ll see hundreds of examples online: short to mid-length films that seek to solve cinematic problems or throw light on a particular area of the film. The simple fact that actual film clips can be used, freeze-framed, magnified and layered with narration makes this a remarkably viewer-friendly form of criticism, as evinced by the popularity of essayists such as Kevin B. Lee or Tony Zhou.

Edward Ross’ Filmish: A Graphic Journey Through Film brings the spirit of the video essay to print. There are seven chapters—“The Eye”; “The Body”; “Sets And Architecture”; “Time”; “Voice And Language”; “Power And Ideology”; “Technology And Technophobia”—but each is further divided into explorations of specific themes, usually a page or two long. The chapter on time, for instance, begins with a discussion on editing, then goes on to consider films that appear to unfold in real time (High Noon, Cleo From 5 To 7) and others whose narratives play elaborate time games (Happy End, Memento). The next two pages are dedicated to the time-travel genre, before it closes with films in which time and memory and personal history are fused and often confused (Hiroshima Mon Amour, Waltz With Bashir, The Mirror). 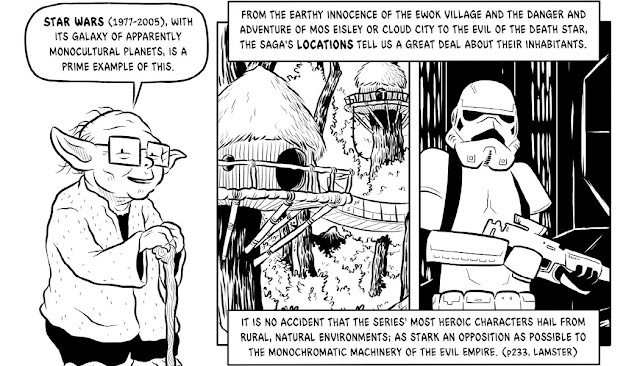 While it wouldn’t be impossible for a skilled critic to cover similar ground in a written essay, the graphic medium is ideally suited for a series of quick, concise arguments (as is the video essay). That Ross can, in the space of a few panels, jump genres and eras and bring together films as disparate as The Terminator and La Jetée as part of the same overarching argument is what makes Filmish so provocative and enjoyable. It would make a great companion piece to Mark Cousins’ 15-part The Story Of Film: An Odyssey, or Slavoj Žižek’s The Pervert’s Guide To Cinema and The Pervert’s Guide To Ideology, documentaries which delight in confounding conventional thinking about cinema.

Some readers might wonder why a fair number of Ross’ illustrations bear only a passing resemblance to their filmic counterparts; the Will Smith drawn on page 41 looks more like Eminem. I would argue that an exact likeness is beside the point and that Ross’ illustrations are occasionally stunning but largely functional—at the service of his arguments, which is where the primary interest of the book lies. What did bother me somewhat, though, is Ross’ tendency to pepper each page with quotes by critics, academics and cultural theorists. It could be that Ross, not being a film critic himself, feels like he must use other critics’ arguments to bolster his own very entertaining theories, which is understandable, but the exact citations could nevertheless have been relegated to the endnotes.

Ross works as an illustrator, writer and comic artist in Edinburgh. Filmish is his first graphic novel, and though it’s autobiographical only in a couple of places, he does utilize a cartoon version of himself—with square spectacles and hints of scruff on his face—as narrator, much like Scott McCloud did in Understanding Comics. That 1993 graphic novel is now seen as a key work of comic book criticism. Whether Filmish attains comparable cult status remains to be seen, but it will certainly light, or further stoke, the fires of cinephilia in the minds of those who read it.

This review appeared in Mint Lounge.
Posted by a fan apart at 7:10 AM