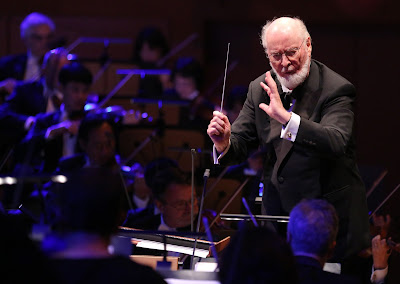 When was the last time you were able to sing a film’s score out loud? Not just recognize a piece of music, but actually go “Da dum da dum da da” from memory? The most recent one I could manage was Pirates Of The Caribbean. I can recognize the themes from Christopher Nolan’s Batman films and Inception, but I can’t really sing them. As for some of the more complex, path-breaking scores in recent times—Trent Reznor and Atticus Ross’ work with David Fincher, Jonny Greenwood’s There Will Be Blood—forget about it.

It’s difficult to find a John Williams score that doesn’t lend itself to humming, singing or air-conducting. Take the opening fanfare from Star Wars, very likely the most famous piece of film music of all time. Or the martial theme from Raiders Of The Lost Ark. Or the ominous two-note sting from Jaws, a close second to Bernard Herrmann’s Psycho shower music in the scary film music canon. Or the gently sweeping orchestral movements in E.T. The Extra-Terrestrial and Jurassic Park. There’s something about a Williams score that lifts the heart, quickens the pulse, makes one feel weightless and wonderstruck.

Later this month, Williams is one of the contenders for the Academy Award for Best Original Score for his work on J.J. Abrams’ Star Wars: The Force Awakens. It’s his 50th nomination—he’s second only to Walt Disney as far as Oscar nods are concerned. His near-omniscience at the Academy Awards underscores the extent to which Williams is, for people all over the world, the sound of Hollywood. It helps that his music is so uncomplicated. More often than not, his compositions use simple brass or string arrangements, with a little timpani sprinkled over. It also helps that he’s composed most of his music for the films of Steven Spielberg, another accessible yet supremely masterful artist.

In a video essay titled The Spielberg Face, Kevin B. Lee points to the director’s repeated use of actors standing “eyes open, staring in wordless wonder”. It’s in these moments of wordless wonder that Williams takes over from Spielberg. Their partnership, which began in 1974 with The Sugarland Express, is now 26 films old—27 with the forthcoming BFG. It is difficult to imagine one’s work without that of the other—the flight to Neverland in Hook minus that theme that soars along with it; the child-like refrain of Close Encounters Of The Third Kind without those stunned, upturned faces. Williams has done great work with other directors—seven Star Wars films, the first three Harry Potters—but he’s tied to, and matched perfectly with, Spielberg.


If there’s anyone who might challenge Williams for the title of greatest living film composer, it’s the other octogenarian nominated for an Oscar this year. Ennio Morricone has been composing for the cinema since the turn of the 1960s. He began, like Williams, as an arranger, eventually graduating to composition and film scores. The breakthrough came when he teamed up with his fellow Italian Sergio Leone on A Fistful Of Dollars (1964). This was the first Spaghetti Western (essentially, Westerns made in Italy with Hollywood stars), and Morricone’s wild sound became synonymous with the genre. By the time The Good, The Bad And The Ugly arrived in 1966, Morricone’s cavernous soundtracks, filled out with echoey guitars, chanting and animal shrieks, were being recognized and imitated the world over.

Morricone’s scores for Westerns are so unique that he’s been primarily associated with the genre over the years. This must be a source of considerable irritation to him, for Westerns only comprise around a tenth of his output. In his 50-year-plus career, he has lent his compositional talents to everything from giallos to arthouse cinema. People who speak of that fabled “Leone sound” are usually referring to his Westerns, for what manner of sound could possibly encompass the soundtracks of The Battle Of Algiers; Salò, Or The 120 Days Of Sodom; Cinema Paradiso; and Duck, You Sucker? While Williams spent his life largely wedded to one film-maker, Morricone worked with everyone from Tinto Brass to Terrence Malick, resulting in a much wider-ranging soundscape than many give him credit for.

Morricone has been nominated this year for his work on Quentin Tarantino’s The Hateful Eight. Though Tarantino had used his pieces in earlier films, the two had never collaborated on an entire soundtrack before. After 2012’s Django Unchained, Morricone said he wouldn’t want to work with Tarantino as he “places music in his films without coherence” (he later said that he had only been partially quoted). In any event, Tarantino, a massive fan of both Leone and Morricone, managed to convince the 86-year-old to score his film. It was Morricone’s first Western since Buddy Goes West, in 1981, and it won him his third Golden Globe (after The Legend Of 1900 and The Mission) last month.

The prospect of Morricone head-to-head with Williams on Oscar night is a delicious one, not just because the two hold so much of film history between them, but also because they represent two very different approaches to scoring for movies. One is the Hollywood composer par excellence, while the other has hewed his own stubborn path over the years. Williams is velvet, Morricone sandpaper. Coincidentally, both their nominated scores look back at older films. Morricone had as a starting point unused bits he had composed for John Carpenter’s 1982 Antarctic horror film The Thing, a possible clue to why The Hateful Eight sounds so brooding and demonic. As for Williams, who has a lifetime’s experience of working on sequels, his Force Awakens score blends the instantly recognizable musical themes from the earlier Star Wars films seamlessly with newly composed ones.

Of course, there’s a possibility neither of them will win. I wouldn’t expect Jóhann Jóhannsson’s effective but squally score for Sicario or Thomas Newman’s (who was probably praying Spielberg wouldn’t start making frantic calls to John Williams) work on Bridge Of Spies to deny the two veterans, but Carter Burwell’s bittersweet score for Carol is certainly Oscar-worthy. So if you ignore the popular 'narrative' that’s been building around this particular category, maybe it’s a three-way fight. But as far as modern film composition—in particular the kind you can sing aloud—is concerned, it’s Williams versus Morricone all the way.

This piece appeared in Mint in the run-up to the Oscars. Morricone won, and mentioned Williams in his speech.
Posted by a fan apart at 1:45 AM