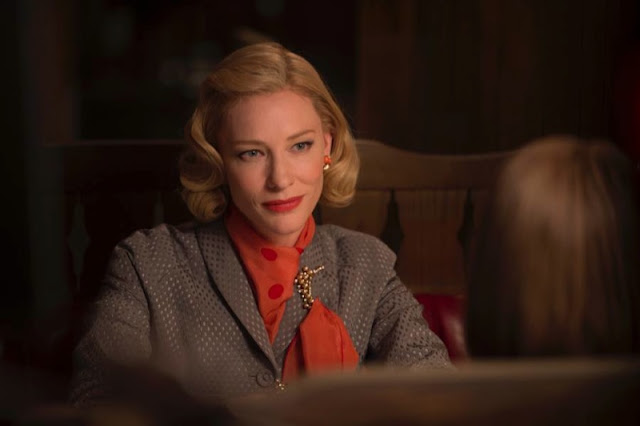 It’s no accident that the first scene in Carol is a conversation between two lovers that’s broken in on by a garrulous interrupter. For someone like Todd Haynes, who takes seriously his film history, this amounts to a statement of intent. If you’re making a film about a curtailed love affair, it takes some courage to begin with a steal from Brief Encounter. Many have tried to replicate, with limited success, the sad sweetness of the 1945 David Lean film about two strangers (one of whom is married) who fall in love. But Haynes has earned the right to appropriate it, for Carol is an excellent companion piece to Lean’s film, and a stellar entry in the limited canon of cinematic sighs.

The film is based on the Patricia Highsmith novel The Price of Salt, which told the story—very controversial in 1952—of two lesbians, a glamorous socialite named Carol (Cate Blanchett), and Therese (Rooney Mara), a timid shopgirl. They meet on a snowy winter evening in the gifts section of a Manhattan department store. Therese advises Carol on an appropriate Christmas gift for her daughter; Carol tells her in passing she likes the Santa cap she’s wearing. It’s a charming, if mundane, first meeting, made significant only by the fact that Carol leaves her gloves behind.

Even as Therese wastes little time in mailing the gloves back to Carol and striking up a friendship with her, we’re given glimpses of their respective, unhappy lives. Carol’s marriage is in its death throes; the first clue that this might be due to her sexual orientation is provided by her husband, Harge (Kyle Chandler), who bitterly remarks about her spending time with someone named Abby, who we later discover was her lover. Therese, too, is in a fracturing relationship; her fiancée, Richard (Jake Lacy), is headed to France, but she’s as uninterested in joining him there as she is in the advances of his friend, Dannie (John Magaro). 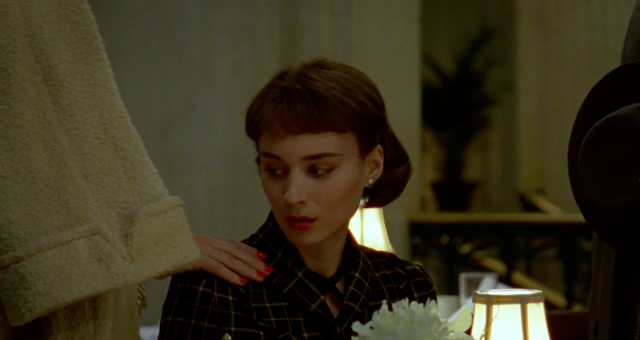 It’s a considerable feat to make a film about two women falling for each other without once mentioning the word “lesbian”. The closest we get to anything explicit being stated is when Harge attaches a “morality clause” to their divorce proceedings, or when Richard accuses Therese of having a crush on Carol. This restraint emphasizes further the desperate, self-censoring nature of gay life in 1950s America; in very literal terms, the love that dare not speak its name. If Edward Lachman’s camera—peering around corners, or through a succession of windows—makes it seem like we’re spying on these characters, that’s because some were being spied on, by their spouses, even by the government.

The film’s debt to Brief Encounter and the swooning 1950s films of Douglas Sirk notwithstanding, Carol reminded me even more of Wong Kar-Wai, especially the sumptuous melancholia of his 2000 film In the Mood for Love. Like Wong, Haynes piles up minute details to create an atmosphere of erotic intimacy: a hand carelessly resting on a shoulder, strands of Carol’s blonde hair seen in close-up, the dabbing of perfume. Lachman’s cinematography is key, but so is the production and art design, the costuming, and Carter Burwell’s elegant, wistful score; all of which amplify, rather than smother, the indelible lead performances. Mara, shaking off her shyness by degrees, is heartbreaking, though it’s Blanchett’s Carol—as knowing as Norma Desmond (Sunset Blvd. plays on TV briefly), as brittle and perfectly composed as fine china—who struck me as a singular creation. Few actors since Gena Rowlands can play an exposed nerve as well as Blanchett, and it’s something to see her start out the film coolly seductive and then begin to fray as the prospect of losing her daughter becomes very real.

Perhaps it isn’t surprising that Carol isn’t in the running for a Best Picture Oscar. The soul of the film is in the little details—the side glances and nervously tapped cigarettes and jazz records playing in the background—rather than the broader, more easily understood movements of plot and character. If you’re watching Carol, watch it closely. Not a lot happens, but an entire world is revealed.

This review appeared in Mint.
Posted by a fan apart at 1:20 AM