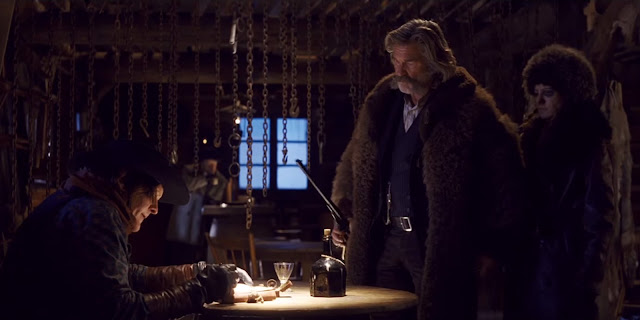 When Quentin Tarantino trapped seven men in a warehouse for much of the running time of Reservoir Dogs all those years ago, he may have been guided by economic reality as much as his storytelling instincts. Today, 24 years later, he can make pretty much whatever he wants, so it’s intriguing to see him return to a similar scenario in The Hateful Eight. The budget is, of course, vastly inflated—$44 million to Reservoir Dogs’ $1.2 million—but the general idea, of gathering a bunch of dangerous people who don’t trust each other in one room, is much the same.

We have to get to the room first, though, and Tarantino takes his time reaching there. Even for a director known for his penchant for setting a scene and delaying the pay-off, this is carefully planned stuff. The first half, set some time after the Civil War in snowy Wyoming, US, is literally all build-up. We first meet Major Marquis Warren (Samuel L. Jackson), a bounty hunter who convinces John Ruth (Kurt Russell), another bounty hunter who’s transporting a fugitive, Daisy Domergue (Jennifer Jason Leigh), to give him a ride in his carriage. Soon, they’ve taken on another passenger, a southern rebel army man named Chris Mannix (Walton Goggins). It’s like that most classic of Westerns, John Ford’s Stagecoach, only with a lot of cussing and nothing like a moral compass.

When a blizzard forces them to take shelter in a haberdashery (when was the last time you heard that word uttered in a film?), we’re introduced to the remaining hatefuls: a British-accented hangman, Oswaldo Mobray (Tim Roth); a mysterious cowboy, Joe Gage (Michael Madsen); a former Confederate general, Sanford Smithers (Bruce Dern); and a Mexican gent named Bob (Demián Bichir). And like that, we’re watching Reservoir Dogs as a Civil War Western, with a touch of Agatha Christie. To reveal more would be unfair, so all I’ll say is that while every character earns the appellation “hateful”, you’ll likely feel something like sympathy for each one before the film is over.

That each protagonist alternately engages and repels the audience is what makes The Hateful Eight an unsettling, startling film. Some of the scenes are among the most poignant Tarantino has ever written—like when Bob plays "Silent Night" on the piano and Warren and Smithers, black man and Confederate general, sit down and converse. Yet these scenes are often followed by moments of almost inhuman cruelty exhibited by the same characters. If that doesn’t sound like much fun, well, it often isn’t. Years of defending the violence in his films have hardened Tarantino’s stand on the issue; like Django Unchained, this film has a lurid, dare-you-to-blink quality that’s more than a little off-putting.

It’s when he isn’t trying to shock you—which, thankfully, is most of the film—that Tarantino sneaks in some of the best writing and direction of his career. There are the little tricks, such as the deliberate shift from shallow to deep focus in one scene, and big ones, such as “The Four Passengers” flashback chapter. Critics of his use of racial invective will find no reason to change their mind about the director here, but they should also note how, using a set-up as intricate as the King Kong riddle in Inglourious Basterds, he manages to comment on modern-day police violence against the black community in the US. Tarantino has waded into the race debate these last few years, and while one may find his methods difficult to swallow, it’s obvious that he’s sufficently moved by the issue to try and address it in his own bullheaded way.

All the principals have a great time delivering Tarantino’s chewy dialogue—Goggins, an under-appreciated actor best known for TV shows like The Shield and Justified, is especially funny. There’s certainly a lot of talk, and viewers with itchy fingers might find themselves reaching for their mobiles. I'd urge them to fight that impulse and concentrate instead on Robert Richardson’s cinematography or Ennio Morricone’s restrained score (closer to his giallo themes than his Westerns). But if you're not into Tarantino for the words, why are you watching him at all?

This review appeared in Mint.
Posted by a fan apart at 1:19 AM