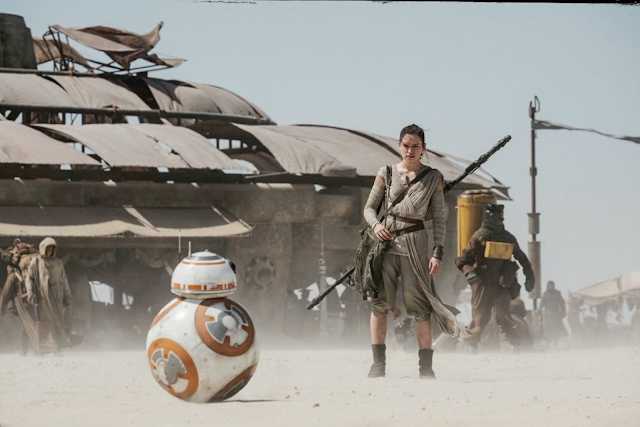 What must today’s youngsters make of Star Wars? The original 1977 film helped create the concept of the tent-pole release, an entity extending from theatres to toy stores. Now, there’s a tent-pole every fortnight. Will they come out of The Force Awakens ready to go back in again, like their parents did all those years ago? Or will they go home and set a date with the next X-Men movie? Is Star Wars just one franchise among many, or is there something that sets it apart?

Director J.J. Abrams seems anxious to impress upon movie-goers that Star Wars (the original trilogy, at least) was no ordinary series. Rarely have we been sold as hard on a myth as in the first act of The Force Awakens. Some 30 years have passed since the events of Return Of The Jedi. Our heroes have scattered: Han Solo (Harrison Ford) is off doing disreputable business deals; Princess Leia (Carrie Fisher), now General Organa, is leading the Resistance; and Luke… well, no one knows where Luke is. For Rey (Daisy Ridley), a suspiciously gifted scavenger, and Finn (John Boyega), a Stormtrooper who has a change of heart, the Force and the Jedi are urban legends. Abrams makes them audience surrogates: they must be given a reason to believe.

The build-up is probably the most pleasurable part of the film. With every familiar sighting—the Millennium Falcon! Luke’s lightsaber!—the heart jumps, and, with it, John Williams’ score. Some things never change: The plot still turns on a little beeping droid (this one’s called BB-8) delivering a galaxy-saving message; sons are still avenging, or taking revenge on, their fathers; and best of all, they still insist on making ever more powerful Death Stars which can be destroyed with one well-aimed missile.

Abrams achieved something rare with his 2009 Star Trek reboot, which managed to satisfy picky older fans while bringing a new audience into the fold. I suspect the same will happen here; Abrams has a Spielbergian knack of making the narrative zip along, Oscar Isaac is surprisingly convincing as a square-jawed Resistance pilot, and Finn and Rey are extremely root-able characters. I was also a little moved to see Ford's normal grouchy heroics underlined with traces of hard-won wisdom and regret. What The Force Awakens could have done with, though, was a worthy villain. The antagonist here is Kylo Ren, a Jedi knight who’s gone over to the dark side and is now a Commander in the First Order, a spin-off of the evil Galactic Empire. He has in his possession the twisted, mangled mask that Darth Vader wore and wears a Vader-like mask himself, but his motives are unclear; his backstory is obviously being kept in reserve for the sequels. And when the mask is removed and Adam Driver’s petulant face is revealed, something is lost.

The Force Awakens is snappily written on a scene-to-scene basis, though it’s also true that Abrams, Michael Arndt and Lawrence Kasdan don’t manage anything near as clever as Kirk meeting the older Spock in the Star Trek reboot. By the time the third act comes around, I found myself wishing for a couple of new tricks instead of refashioned old ones. Abrams works well with actors and is, to my mind, a more naturally gifted film-maker than George Lucas, whose limitations were severely exposed when he decided to direct the dreadful prequels himself. But it’s one thing to riff smartly on past successes (which Abrams has done on Mission: Impossible 3, two Star Trek films and Super 8, which used every trick in the Spielberg playbook), quite another to suggest a daring new direction. The Force Awakens is fun while it lasts and a welcome opportunity to meet old friends, but the series might need something more radical if it doesn’t want to be lost in a sea of franchise films.

This review appeared in Mint.
Posted by a fan apart at 11:10 PM