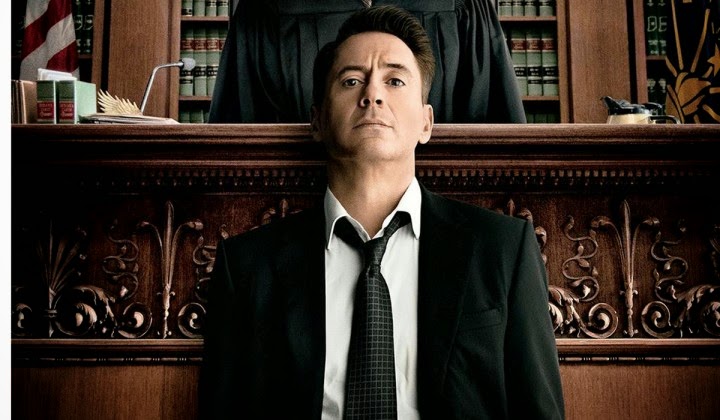 There was a time, back when "The Avengers" meant the old TV series, when Robert Downey Jr was good. Not just a star, you understand, but an actor. The freewheeling unpredictability of his acting in those early days was something to behold; stealing scenes in Short Cuts and Natural Born Killers, waltzing through the demanding physical comedy of Chaplin. Then came the drugs, the arrests, the bottoming out. Rehab followed: Wonder Boys, A Scanner Darkly, Zodiac. Finally, in 2008 came Iron Man, and Downey Jr. was a star again. Real acting would have to wait.

It's been a lucrative six years. Downey Jr's now at the heart of three gigantic franchises — he's done three Iron Man films, two as Sherlock Holmes, and one with the Avengers gang (the sequel's in pre-production). Still, one wonders whether Downey Jr sometimes feels the urge to something other than trade wisecracks and wear funny suits onscreen. The Judge suggests that he does.

It's a tale as old as Hollywood. Big-town lawyer, shark-like in courtrooms but unhappy in his moneyed, embittered soul, is called back to his hometown. He's initially disdainful of the people there, but they eventually teach him the true meaning of the law and the value of family and friendship, and so on. In its first 30 minutes, David Dobkin's film determinedly ticks off every lawyer/homecoming film cliché in the book. Distant, dismissive dad? Yes. Washout brother who never managed to leave town? Sure. Old girlfriend with a sharp tongue who still carries a torch for our hero? You know it.

Since this is that kind of film, it also stands to reason that although Hank (Downey Jr) returns to the homestead in Indiana as a result of his mother's passing, it'll take something more dramatic to make him stay. That circumstance duly arrives when his father, Judge Palmer (Robert Duvall), is involved in a road accident and accused of murder. Eventually, and very reluctantly, the judge allows his son to take on his case. As if that's not enough melodrama, the judge confides in Hank that he has cancer.

They say that if you're a doctor, you shouldn't operate on a family member. After watching this film, I'm convinced they should have a similar rule for lawyers. Hank and his dad turn the trial into one big Dr-Phil-family-therapy session. I kept hoping for something like the wit and sleight-of-hand plotting of My Cousin Vinny, but The Judge has bigger emotional fish to fry. We learn why Hank and his father haven't met in 20 years, and why his brother Glen is stuck with running a tyre store. It's not much of a revelation, but the film milks it for all it's worth, with Downey Jr and Duvall yelling at each other while a hurricane rages outside.

All this sounds terrible on paper, and it doesn't work on screen for the most part. But it does work just a little. Much of this is down to Downey Jr, who throws himself into the role as if he were acting in a much better film. His scenes with the 83-year-old Duvall, who's been playing crusty old codgers for 30 years now, have a Hollywood crackle to them — the sort of playacting that's easy to spot and difficult to resist. And they have strong support: Vincent D'Onofrio as Glen, Billy Bob Thornton as a smooth prosecuting lawyer, and the always-welcome sight of Vera Farmiga as Hank's old flame. As the film progresses and you realise it isn't going to become much starter, it's easier to sit back and enjoy the emotional manipulation and scenery-chewing. Predictable, hokey and melodramatic — but not a total loss.

This review appeared in The Sunday Guardian.
Posted by a fan apart at 2:02 AM