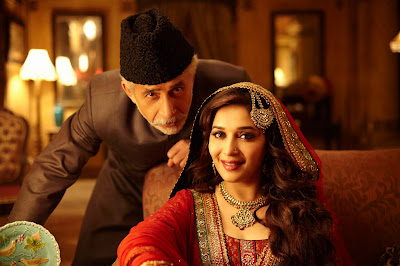 We first encountered the uncle-nephew conman team of Babban (Arshad Warsi) and Khalujan (Naseeruddin Shah) in Ishqiya, the 2010 debut of former Vishal Bhardwaj aide Abhishek Chaubey. That cheerfully profane film introduced, among other things, the idea of a foul-mouthed heroine to mainstream Hindi cinema. Defenders of public decency will be relieved to know that its sequel Dedh Ishqiya has a lot of shayari and very little by way of “chutiyam sulphate”. Yet, if you look beneath all the Urdu poetici­sing, you’ll find that the lusts and orneriness of the earlier film are very much intact.

Dedh Ishqiya starts off with a robbery, during which Babban and his uncle are separated. The scruffy Khalu resurfaces as Ifthekhar, a dapper poet vying – in a shayar showdown of sorts – for the hand of the widowed
begum of Mahmoodabad (Madhuri Dixit-Nene). Nephew tracks down uncle, and discovers that while the elderly con is genuinely infatuated with Begum Para, he also has an eye on her fortune. Babban finds his own object of desire in Muniya (Huma Qureshi), Para’s handmaid, who naturally harbours agendas of her own. There’s also Jaan Mohammad (Vijay Raaz), a thuggish local MLA and rival suitor of the begum. What’s the Urdu for “double-cross” again?

There’s the cinema of big payoffs, and there’s the cinema of small pleasures. At its best, Dedh Ishqiya is one example after another of the latter. These pleasures could be as simple as Ifthekhar being diagnosed by an ancient hakim as “mareez-e-ishq”, or an elaborate gag like the Mexican standoff that lasts through the night. Some viewers might find their bliss in the refined lilt and subtle allusions of Chaubey and Bhardwaj’s script, where the pointed use of a word like “lihaaf” can function as a nod to a 1942 Ismat Chughtai short story. Chaubey’s narrative control has grown more assured since his debut, and though the film goes off the rails in the last ten minutes, it’s still massively enjoyable. Bhar­dwaj’s lines and Gulzar’s lyrics take centrestage, as they ought to, but do take a moment to note the fine work by Clinton Cerejo (score), Subrata Chakraborthy and Amit Roy (production design) and Setu (cinematography).

Warsi and Shah, having done the hard work in Ishqiya, coast through this film. Shah in particular performs with uncharacteristic tenderness; it helps that he doesn’t have to overreach while speaking chaste Urdu. Qureshi and Raaz keep their faces straight and their cards close to their chest. As for Dixit, this is that one sublime performance to accompany her dozens of hits from the ’80s and ’90s. As befits one of Indian cinema’s best dancers, she’s holding us with the eyes; we see the loneliness and desperation in them, long before motivations are explained and secrets revealed. It’s difficult to look at anything else when she’s onscreen.

Review appeared in Time Out Delhi.