The Limits of Control: DVD Review

A lone assassin in sharp suits goes from one Spanish town to another. In each, he meets a person who gives him a matchbox containing a chit of paper, the contents of which he memorises. He then swallows the paper, washing it down with a shot of espresso. “You don’t speak Spanish, do you?” he’s asked repeatedly. He doesn’t. In fact, he barely speaks at all. He doesn’t sleep either. He smiles once. 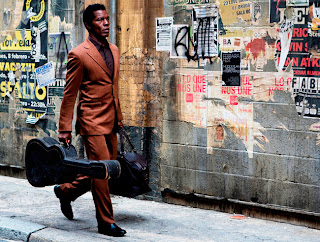 Such is the plot of The Limits of Control, and if you think we’re being oblique, wait until you see the film. Less abstract than downright inscrutable, this 2010 movie with faint echoes of Le Samouraï and Point Blank never amounts to anything more than the sum of its parts. But lord, what parts they are. French-Ivorian actor Isaach De Bankolé plays the wanderer. There’s Bill Murray and Gael García Bernal and Tilda Swinton in a white wig. The voluptuous Paz de la Huerta appears briefly as a character called The Nude, which is no metaphor. Japanese ambient metal band Boris contributes a dissonant soundtrack. And the beautifully composed images come courtesy Christopher Doyle, cinematographer on most of Wong Kar-Wai’s films.


The man responsible for bringing these eclectic talents together is Jim Jarmusch, one of the patron saints of modern American indie cinema. With this film, he’s constructed a stately riddle, but is there a point to the film’s recurring motifs or its digressions on art, music and cinema? One could be cynical and say that vague statements about Sufism and Finnish films are an easy way to shift the burden onto the audience. One should also keep in mind that Jarmusch has never been an expository filmmaker, and that even his best films – Stranger Than Paradise, Down By Law, Night on Earth – have an abiding weirdness to them. But those films also made you feel something, which is something The Limits of Control never really does. No special features.
Posted by a fan apart at 11:28 PM