An ageing French filmmaker decides to re-make Louis Feuillade’s Les Vampires with Hong Kong’s Maggie Cheung in the lead role. Maggie, playing herself, becomes an object of desire (a discreet one at that) for the director as well as her costumer Zoe. But Cheung is lonely and bored, and starts looking for ways to make her trip more fun. You’d never guess what she gets up to (or doesn’t – this is a very puzzling film). This light-footed, difficult-to-categorise film appeared in 1996 and was directed by Olivier Assayas. 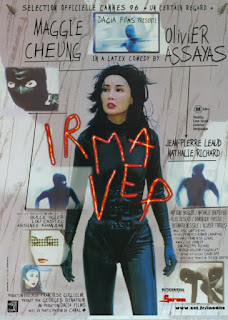 - I may be wrong, but there seem to be a series of nods to Jacques Rivette’s Celine and Julie Go Boating, another entertainingly elusive look at role-playing and the overlapping of life and cinema. There’s the way Zoe keeps saying a high-pitched “Woo” when she’s trying to catch Maggie’s attention, just like Dominique Labourier, who played Julie in Rivette’s film. Bulle Ogier, who played one of the vampiric residents of the ‘movie house’, as also cast as a villain in a minor key. Also, both the titles are a play on words: ‘irma vep’ is an anagram for ‘vampire’, and ‘aller en bateau’ (the original title was Céline et Julie vont en bateau) is the French equivalent of ‘shaggy dog story’, which the film certainly is.

Rivette’s film also has a Feuillade connection. It's alternate title is ‘Phantom ladies over Paris’, and there's a scene where Celine and Julie are seen roller-skating dressed like Musidora. 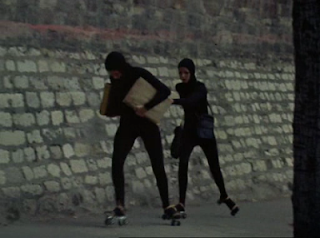 - As director Assayas acknowledged later, Irma Vep is influenced by two films about filmmaking. The first in Truffaut’s Day for Night, from which the film borrows the idea of a film set being one of high energy and confusion. The second is Fassbinder’s Beware of a Holy Whore, from which it takes the idea that a film set is full of stasis, compromise, boredom. Film as life, film as death: Irma Vep manages to incorporate both these world views into its own. Of course, a more obvious nod is Assayas’ casting of Jean-Pierre Leaud and Lou Castel, the central actors in Truffaut’s and Fassbinder’s films respectively. 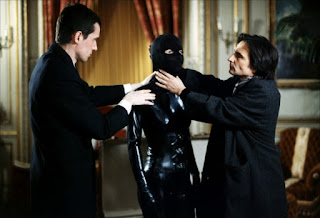 - Three pieces of music, all used beautifully. Ali Farka Toure and Ry Cooder warm “Soukora” accompanies Zoe and Maggie on their bike ride, teasing us with the thought that maybe the two are going to fall for each other. Serge Gainsbourg and Brigitte Bardot’s “Bonnie and Clyde” is perfect for the bohemian chic atmosphere of the dinner scene. And “Tunic” by Sonic Youth is an out of left field choice for the theft/dream sequence, but is nevertheless an appropriate accompaniment – musically and lyrically (“Dreaming, dreaming of a girl like me”) – for Maggie’s strange transformation. - Were the French really that despondent about the state of their cinema in 1996? Nearly everyone but the directors seem disillusioned, cynical. 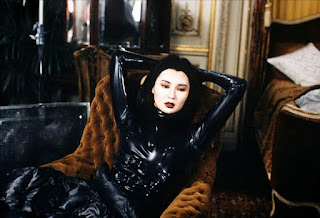 - Zoe and Rene are responsible for dressing Maggie up in a latex body suit from an S&M shop. Yet, she doesn’t find this fetishist costume constricting – unlike Nathalie Boutefeu, she has no problem breathing with it on. Also, it helps her literally ‘become’ Irma Vep, to disappear into her role.