The Shins - Port of Morrow 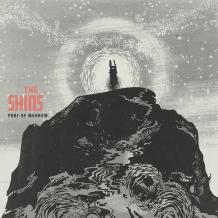 For a while, The Shins were the indiest of the indie. Pitchforked, quite literally, into the limelight, they released three albums that melded the nervy lyrics of frontman James Mercer to sublime lo-fi pop. However, when Mercer fired keyboardist Marty Crandall and drummer Jesse Sandoval in 2008, it left him the only original member of the band, and forced fans to come to terms with the fact that the Shins was now effectively The James Mercer Project. Port of Morrow is therefore likely to be judged not only on its own merits, but also in terms of its adherence to or departure from the Shins sound.

For this album, Mercer’s called upon some of his old bandmates, members of his current touring outfit and a few hired killers. One of the guests is former Sleater-Kinney drummer Janet Weiss, whose backbeat lends “The Rifle’s Spiral” and “Simple Song” a solidity that wasn’t there on the band’s previous albums. Shins followers might point to this and other evidences of a tightened pop structure (especially on the ballady “It’s Only Life”) and moan that Mercer’s been listening to too much American Idol. It’s true that Port of Morrow mirrors indie’s steady drift towards the mainstream. But there’s enough of the old Mercer in here as well. His falsetto on the Portishead-like title track makes for a refreshingly weird closer. And in the shimmering “Bait and Switch”, he sings “High from my psychic derailer/ Drive this car to the sea/ Spend the night as high as a cannon, a towering hemlock.” Can’t see Michael Bublé covering that.


This review was brought to you by Time Out Delhi, home to the worst coffee in the capital.
Posted by a fan apart at 3:27 AM