Mirch Masala: Not so hot

Mirch Masala has been called an ‘important film’ and a ‘classic’, but I doubt its supporters would be able to explain why without throwing an anthropology textbook at the reader. I can just visualise a review of the film that talks about subaltern tradition and the reformist movement and the idea of woman as avenging goddess. The truth, however, is that there’s less here than meets the eye.

The film is a strange blend of two disparate genres – the social reformist drama and the Western. The first is in plain sight from the start, as unsubtle attempts are made to tackle several ‘big’ themes: women’s empowerment, rural education, caste and class consciousness. The second emerges gradually; you can see it in the film’s borrowing of that stock Western situation – the posse holed up awaiting the enemy’s attack – as well as in the way a lot of the action is staged. There’s also a definite Morricone twang to the music in the second half, which actually goes quite well with the traditional Rajasthani music on the rest of the soundtrack.

It all starts when a subedar (tax collector) played by Naseeruddin Shah lays eyes on village girl Sonbai (Smita Patil) and decides, twirling his moustache, that he must have her. She resists his advances, even as  the villagers try and convince to sacrifice herself for the greater good. After a slap and an impressively constructed chase sequence through a sea of drying red chillies, she takes shelter in a warehouse presided over by an old man with impossibly bushy eyebrows, who on closer inspection turns out to be Om Puri. Most of the other women in the village are also in there, and Mirch Masala neatly turns from class oppression to a battle of the sexes. 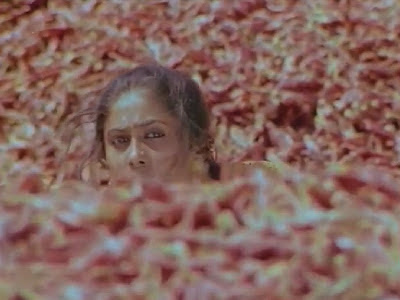 You could say that the male population of the village asking Sonbai to give herself up is a metaphor for the abandonment of the motherland in the face of foreign oppression. Even if it is, does it really matter? Metaphors that heavy-handed are best left to idealogues. I doubt it’s a coincidence that the headmaster’s spectacles are shattered in the same fashion that the old woman’s in Battleship Potemkin are. Potemkin’s director Sergei Eisenstein used his visuals to drive home a simplistic worldview, albeit with great power. Mirch Masala is just as simplistic, but what is its point? That women in rural India are denied their rights? It’s hard to believe that this came as a surprise to viewers in 1987. Yet, instead of approaching the topic from a new angle, this film uses stock characters to espouse themes that other directors had already tackled in the decade past with more subtlety and insight. 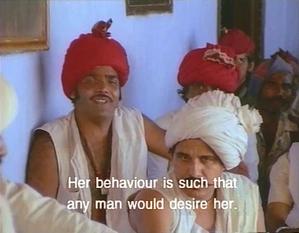 For all its misfires and manipulations, Mirch Masala isn’t devoid of appeal. The camerawork is insidiously good at times; note the masterful swivel and pan around a group of villagers sitting with the subedar. There’s the blanched colour palette highlighting the fiery red of the chillies. Smita Patil and Deepti Naval battle patriarchy, tradition and the limitations of the screenplay to come up with defiant performances. Om Puri is fine as the grizzled gunslinger; his relative composure makes Naseer’s over-the-top subedar seem all the more ridiculous. No one, though, embarrasses themselves as much as Raj Babbar in a bizarre freakout scene that had me wondering why he’d want to exert himself so if he was just putting in a guest appearance.

Mirch Masala is proof that alternative cinema in this country is by no means immune to a good cliché. Hindi cinema has gotten by for so long without subtlety that very few filmmakers seem to think it necessary, or even desirable. This will not change until we start to re-evaluate our ‘classics’, and decide which ones actually deserve to carry that label.
Posted by a fan apart at 2:04 AM