A piece I did for Time Out on the re-release of Titanic in 3D.


Anyone with basic knowledge of the movie business knows there’s really only one cardinal rule: never bet against James Cameron’s latest venture. It’s fully possible that the theatrical rerun of Titanic in 3D will turn out to be as phenomenally popular and lucrative as the original. But what the hell, here's five reasons why it may not.

1. Let’s be honest. Titanic was an embarrassment. The shift from modern-day deep-sea exploration to period melodrama remains one of the great cinematic lurches of all time. The script of the 1997 movie was filled with zingers like “I figure life’s a gift and I don't intend on wasting it.” The direction was impersonal, as if James Cameron had too much on his mind to pay attention to things like nuance and decent characterisation. Instead, as he did with Avatar 12 years later, the director bet everything on visual effects and a sappy love story. It paid off spectacularly, becoming the highest grossing film till date and winning 11 Oscars. We’re all to blame for that, but 15 years have passed and hopefully everybody is wiser now.


2. Releasing Titanic 3D now is like selling semi-old wine in a spanking new bottle. It hasn’t been allowed to age enough; most of the movie-going public between 25 and 45 has already seen it, many of them on the big screen. Apart from the creaky storytelling or clunky dialogue, we only have the dubious pleasure of seeing the ship fall apart in 3D.


3. Cameron has picked the wrong film from his back catalogue to release in 3D. The obvious choice is Terminator 2: Judgment Day, the still-impressive 1991 film that turned Arnold Schwarzenegger’s expressionless killer from the first Terminator movie into an expressionless guardian angel. The prospect of that film with an extra dimension added is mouth-watering: just imagine Robert Patrick shifting shape in three dimensions, or T-1000’s Harley bouncing towards you after making that incredible jump off the ledge. Even the tagline suggests itself: “I’ll be back…in 3D”.

4. Most of Titanic’s repeat viewers, the ones who helped it become the first movie to gross over a billion dollars, were teenage girls worshipping at the temple of Leonardo DiCaprio. For months after its release, it was impossible to separate the film from the hysteria surrounding its young star. But in the decade and a half that’s passed since, DiCaprio has repeatedly subverted his boyish appeal by going over to the dark side as far as his roles are concerned. Team LDC has most likely switched allegiances to Team Clooney or Team Gosling by now.

5. Some of us still haven’t forgiven James Cameron his celebratory woo-hoos at the Oscars in 1998. Who ends his Oscar acceptance speech by quoting his own film’s line (“I’m the king of the world”)? 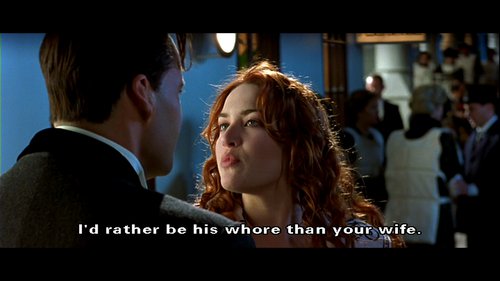 Well, time and literature has been a witness that no one gets wiser when it comes to sappy love stories...
I went and saw it today, in its third week running, jam-packed theater still in awe, me too.
All technicalities aside, a few good old movies are a comfort to re-watch because we know we won't be disappointed..especially if they make us feel 15 again...

"Apart from the creaky storytelling or clunky dialogue, we only have the dubious pleasure of seeing the ship fall apart in 3D"

tch.. tch..tch... seeing ship fall apart in 3D? what about that great Kate-Winslet-wearing-ONLY-the-necklace scene in 3D? isn't that an image worth salivating over? :)