One Flew Over the Cuckoo’s Nest: DVD Review

It’s been 36 years, but One Flew Over the Cuckoo’s Nest is still, to quote of its own lines, absolutely dangerous. Miloš Forman’s film was based on the seminal 1962 novel about one Randle McMurphy, a free-spirited jailbird who’s sent to a mental institution. There, he rebels against the iron rule of the loathsome Nurse Ratched, who preys on her patients’ infirmities, ostensibly to maintain order. The film marked the coming together of several distinct rebel movements: the ’60s counterculture that Ken Kesey, the book’s author, embodied; the rule-breaking ethos of ’70s New Hollywood; and Forman’s own experiences with censorship in Communist Czechoslovakia.
This Ultimate Collector’s Edition comes in the kind of pack that usually changes hands on Diwali. Inside, there’s a booklet, a few postcards and two DVDs, the first of which is the film. The second disc contains outtakes, a look at the current mental healthcare scenario in the US, and a feature-length documentary called Completely Cuckoo. A mix of interviews, archival footage and reminisces – including those of Kesey’s, who disliked the film – Completely Cuckoo is a refreshingly candid making-of feature, enlivened by frequent takeoffs on Forman’s thick Central European accent by cast and crew. 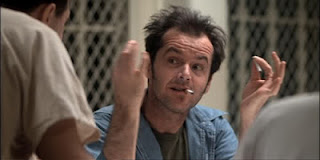 The film’s journey began when Kirk Douglas, fresh from having played McMurphy on Broadway, met Forman in Prague. Impressed with the young Czech filmmaker, Douglas told him to expect the book in the mail and write back if he was interested. The package never arrived, and Forman assumed the star had forgotten about it (it had actually been confiscated by the customs officials). Back home, Kesey disassociated himself from the project, complaining that while he wanted to make The Cabinet of Doctor Calgari, the producers wanted to make Hogan’s Heroes. Douglas passed the producer’s hat to his son Michael (this was before his acting career took off), who along with co-producer Saul Zaentz brought Forman back into the picture. The trio made one key decision early – they would shoot in a real-life mental hospital. 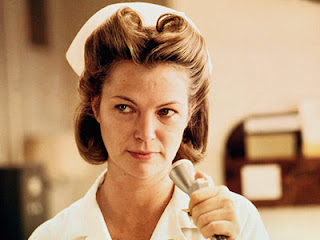 In her Oscar acceptance speech for her role as Nurse Ratched, Louise Fletcher thanked Jack Nicholson and the cast for making “being in a mental institution like being in a mental institution”. It was no idle praise. In the documentary, Milos Forman mentions how his aim was to cast faces one wouldn’t forget in a hurry. As it happens, the entire movie is played out in these faces, be it the bug-eyed suspicion of Christopher Lloyd, the animal fear of Brad Dourif, or Danny DeVito’s shy, unnerving smile. And, of course, there’s Nicholson as McMurphy, grinning like the one truly crazy person there, and Fletcher as Nurse Ratched, her reasonable voice at odds with her cold, hard eyes set in a mask of a face. Underscoring everything is the eccentric score by Jack Nitzsche, who, after years of being Phil Spector’s right-hand man, was used to working with the mentally unstable. 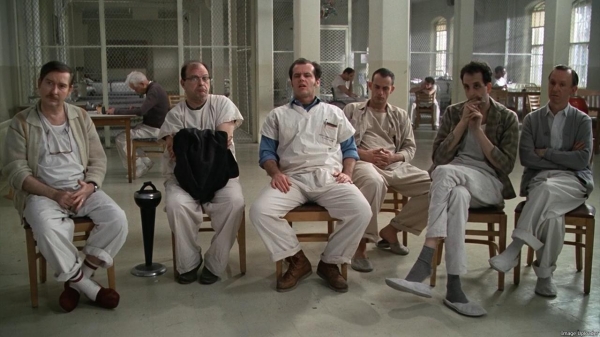 A version of this review appeared in Time Out Delhi.
Posted by a fan apart at 12:15 AM