In pop cinema heaven, there’s a special corner reserved for Tokyo Drifter. Its story – about a veteran hitman who wants to call it quits but keeps getting pulled back – could have belonged to any yakuza B-film of the time. But in the hands of Seijun Suzuki, it was transformed into something strange and beautiful, an idiosyncratic mix of primary colours, eccentric editing and a score that ricocheted from opera to fifties rock ‘n roll to Morricone-like trumpets. Suzuki would soon become a thorn in the Nikkatsu studio’s side; he was never able to make his contracted commercial ventures straightforward enough for the studio bosses. This willful disobedience can be seen all over Tokyo Drifter – in the audacious jump cuts, in the unique visual aesthetic, and in the character of yakuza hitman “Phoenix” Tetsu, smart enough to do anything except find a way to quit.

In many ways, it is like a Melville film directed by Godard. The story isn’t unlike Melville’s Le Samourai, released three years later, in which the assassin Jef is carrying out what he hopes will be his last job (the scenes where the injured protagonists are standing alone in their rooms are intriguingly similar – though this is probably a coincidence). Suzuki also reminds one of Melville in the codified behavior that his protagonists exhibit. Notions of loyalty, to one’s bosses, one’s family, even to one’s enemies, populate Tokyo Drifter. It’s pretty much the first thing we hear, in the mournful song that accompanies the opening credits and spells out the movie’s world-view: “If I die, I’ll die like a man/ For me, loyalty comes before love”.

The treatment, however, is very different from Melville’s meticulous variations on gangster film genre. Suzuki never met a hurdle he couldn’t paint day-glo and straddle merrily. This aesthetic finds an echo in the early work of Jean-Luc Godard. There’s a similar use of colour in A Woman is a Woman, and Tokyo Drifter would make a great double bill with such unpredictable deconstructions of the gangster film as Breathless or Pierrot le Fou. But Godard was always political, whereas Suzuki by and large seemed to have no particular motive other keeping his audience as entertained as possible. In this, he is closer to equal Quentin Tarantino, who has acknowledged Suzuki’s influence on his pop fantasias. The more florid moments of Tokyo Drifter are paid tribute to in Kill Bill Volume I –fake, glittering snow, fountains of blood spewing from a slashed wrist.

A large contributor to Suzuki’s greatness is his use of colour, lighting and space. In this film, he’s assisted hugely by cinematographer Shigeyoshi Mine and Takeo Kimura, one of the great art directors of Japanese cinema. I was particularly struck by three scenes, each with its own distinct visual style. The first is the gritty opening sequence, shot in high-contrast black and white. The second shows a girl unintentionally catching a bullet; after a long overhead shot, she keels over, and the stain on her blouse is matched by the luridly coloured red screen behind her. The third is the climax, in which the impossibly strange yellow décor tries to drag one’s attention away from a gunfight that John Woo must have watched and committed to memory years later. Each of these scenes could have been from a different movie. All of them, however, feel like they’ve come from the same director. 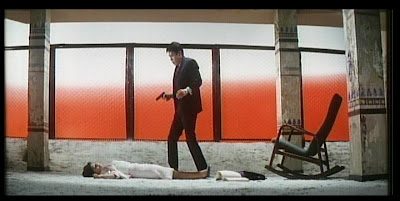 Branded to Kill, as memorable a flourish as any in the “cinema of flourishes” (as David Bordwell described Japanese cinema), released in 1967 and proved to be the last straw as far as Nikkatsu was concerned. Suzuki was summarily dismissed, but by then his reputation had grown. Retrospectives were held; his imprint was noted in the diverse styles of Tarantino and Woo, Wong-Kar Wai and Jim Jarmusch – four filmmakers who affected our conceptions of cool in definitive ways. Fans of their work should know this: if you like that Reservoir Dogs walk, or are fond of chewing a toothpick and wearing a long overcoat, Seijun Suzuki is where a lot of it began.

A music video with visuals from the movie expertly cut to a cover of the title song by Japanese Academic Punks.