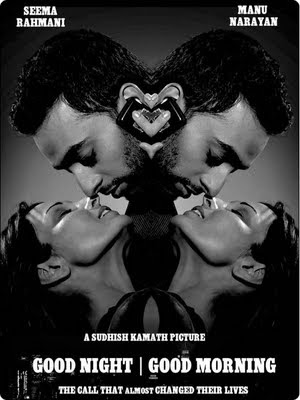 I’ve always had a soft spot for Richard Linklater, one of the few Hollywood directors who makes talky films. You might assume I’m talking about Before Sunrise/ Before Sunset, which are the most overtly talkative of the bunch. But Linklater has always been fascinated by words and their possibilities, from the rambling monologues of his breakthrough feature Slacker to the stoned, proud declarations by the teens in Dazed and Confused. Time and time again, Linklater gives his characters enough time to ramble, realise they’re rambling and steer the conversation back to safer ground (though some of them just go on talking).

This freedom to not make sense all the time lends Good Night Good Morning, which recently showed at the Habitat Film Festival, a bracing authenticity that’s perfectly in line with its subject matter. It’s been directed by Sudhish Kamath, and stars Manu Narayan as Turiya (The Love Guru) and Seema Rahmani, whom some may remember rising above average material in The Loins of Punjab, as Moira. The movie name-drops Before Sunrise early on and it soon becomes clear why: the movie is an extended conversation (on phone) between two almost strangers. It beings with Turiya drunk-dialing Moira from a car; he’d met her briefly at a party in NYC a couple of hours ago. She hangs up on him, then realises she can’t sleep and calls him back. You could argue that stuff like this don’t happen in real life. Or you could recall the times similar things have happened and you’ve said “Man, this is just like in the movies…”

Turiya and Moira proceed to talk the night away. They flirt, discuss their past loves, their mistakes and future plans. Since it’s their first meeting, there’s also an inevitable sizing up, followed by a subtle, ever-present struggle for the upper hand. The great triumph is in the way Kamath ensures that their lines never sound like a movie conversation. These two don’t have the nonchalance to look act when they say something witty – instead, they do what normal people do, and look extremely pleased with themselves. It takes great skill to write something that sounds this off-the-cuff. Too clever, and the viewer beings to question the likelihood of two strangers spitting out one-liner after one-liner at three in the morning; go too far in the other direction, and it becomes commonplace, and not worth watching. Kamath told the Habitat audience that when the movie was being scripted, he’s asked his friends to do what Turiya does – dial a stranger and speak to them. He said that what they spoke didn’t turn out to be important as the way their conversations unfolded, jumping from one topic to another. The dialogue in Good Night Good Morning has this same quality of leaping without looking. It’s that rare screenplay which sounds like it’s unscripted.

The movie’s shot in black and white, though I’m not sure I can see a reason why (I can’t see a reason why not, either). The leads had to be charming for it to work, and they are, Narayan with his timid overtures, Rahmani playfully knowing. The only off-note is Raja Sen as Turiya’s crass buddy J.C., providing comic relief in a film that doesn’t require it. The film is split-screen almost throughout, except for the flashback sequences (absent from the MAMI screening, but wisely inserted back). The actors in these sequences are always Narayan and Rahmani, no matters who the characters in question are. You could argue that the director uses this as a device to garner easy laughs. It’s also possible that this is his way of indicating how potential loves always have to measure up to past ones in the beginning. In the same vein, I must return again to the reference made in the movie to Before Sunrise. Once that title was out there, it would always be a question – maybe in the back of people’s minds, but there nonetheless – of whether Good Morning Good Night would measure up to it. I’m happy to say it does.