Back in 1972, Rolling Stone sent Tom Wolfe, originator of the New Journalism, to cover the Apollo 17 space mission. While researching “Post-Orbital Remorse”, a series about the post-journey depression some of the astronauts were undergoing, Wolfe grew fascinated with the astronauts and their lives. Out of this grew The Right Stuff, his 1979 novel about the famous “Mercury 7” – the first US astronauts in space – as well as one Chuck Yeager, passed over by the Mercury Programme, but regarded by those in the know as the finest pilot of the lot.

The film begins with Yeager attempting to break the sound barrier. His success triggers a race in the pilot fraternity to become the fastest man alive. It’s an early sign of the competitiveness they’ll take forward into their space training. Meanwhile, NASA is looking for pilots who can to woo the public in addition to doing their jobs. The reticent Yeager, despite possessing the “the right stuff” for the job, isn’t seen as charming enough to be an American hero. He recedes into the background, and the film shifts its focus onto the Mercury 7. It’s a risky move, taking your central character out after an hour and bringing him in an hour later, but it suits this film, which is anything but a straight-ahead biopic, as well as its director, the playful Phillip Kaufman.

As in Kaufman’s 1988 adaptation of The Unbearable Lightness of Being – a novel deemed “unfilmable” until he turned it into a funny, sexy piece of cinema – there’s a streak of absurdist humour that runs through The Right Stuff. These off-kilter moments – a monkey being put through the same tests as the pilots to judge who’d do better in space, Jeff Goldblum bursting into meetings with bad news that already everyone seems to know – counterbalance the more conventional ones where the legend of the programme’s success is built. By showing the doubts and fears of the astronauts, as well as their grudging admittance that Yeager may have been the best man amongst them, Kaufman creates a vivid, intimate history, untainted by chest-thumping, of a key moment in the space race.

The cinematography by Caleb Deschanel is as handsome as Bill Conti’s score is stirring. Ed Harris displays prodigious amounts of charm as astronaut John Glenn; also watch out for playwright and sometimes actor Sam Shepard as the soft-spoken Yeager, Dennis Quaid as the grinning, competitive Gordon Cooper, Jeff Goldblum as a Mercury recruiter and Levon Helm, drummer for The Band, as narrator and in a bit part as Yeager’s buddy. Tying together these talents is the often underrated Kaufman, whose film, while eschewing conventional patterns of build-up and dénouement, seldom has a dull moment in its three hours of running time. There’s more stuff that’s right by us on the second disc – deleted scenes, three documentaries on the film and one on Glenn, and commentary by the director and cast members. 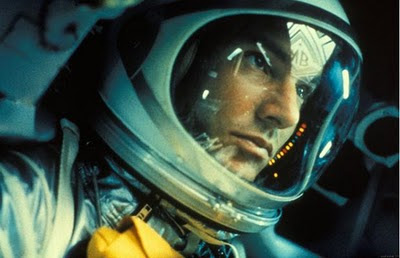 Gordon Cooper, played by Dennis Quaid, post-takeoff and seconds before uttering one of my favourite lines in all of moviedom: "The sun has come up through the window now. Oh lord, what a heavenly light."