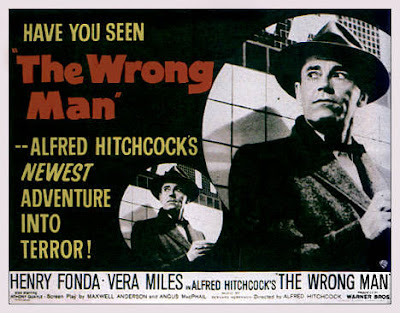 Tell us if you’ve heard the story before. An honest man, trying to make ends meet, is picked up by the police. They tell him that he matches the description of a man who’s been conducting hold-ups in the neighbourhood. He accompanies them back to the station, and things start to unravel. He is identified by two witnesses as the criminal, his handwriting is a match as well. He is put in jail, insisting all the while that he is innocent. In another story, he might have been a faceless victim in a Kafkaesque nightmare; here he is Christopher Emmanuel Balestrero, played by Henry Fonda in The Wrong Man.

The “wrong man” theme was one of Hitchcock’s favourites – he had already used variations on it in a number of his movies. However, as the director himself warns in the narrated opening, The Wrong Man differs significantly from what one might expect from a Hitchcock film. It is based on a true story, and remains faithful to it. There are no MacGuffins. No black humour. No toying with the audience. The tone is somber, often harrowing. Regular collaborator Robert Burks, shooting in black and white, keeps the camera trained on the stricken face of Fonda, while Bernard Hermann contributes a moody, modal score. This austerity, combined with the Catholic references of the second half, reminds one of a Robert Bresson film – even though it’s hard to imagine two directors more dissimilar.

Released in 1956, The Wrong Man was one of Hitchcock’s best-received films. Its impression on the French was especially strong. Godard, then a critic, wrote a lengthy piece about it which invoked everyone from Murnau to Dreyer to Griffith; Truffaut declared it “probably his best film till now” (this in 1957, with Shadow of a Doubt, Notorious and Rear Window behind him). Having gotten it out of his system, Hitchcock never returned to this unironic, spare style. His next “mistaken identity” movie was North by Northwest, a caper so entertaining as to seem light-years removed from The Wrong Man.