I think when I'm 60 years old I'm going to be listening to Mark Knopfler, Paul Simon and Steely Dan. I can't believe it took me so long to hear a single damn song of Dan's, and I credit my buying their boxed set as one of the better impulse purchases I've made over the past few years. 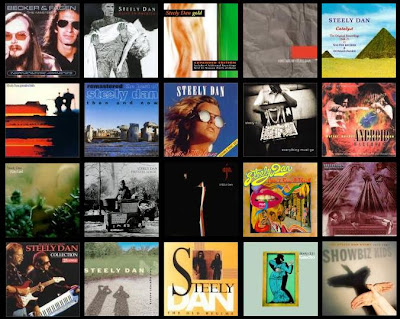 Greil Marcus described it as ‘inexplicably apocalyptic’ I can’t think of a better description for this song. The savage guitar stabs that accompany almost every line are played by Jeff “Skunk” Baxter, the only (semi) permanent guitarist to ever play with the band (Fagen and Becker decided after a couple of albums to disband the original lineup and work exclusively with studio musicians).

For those bordering-on-gospel backing vocals that are so unexpected that every time you hear the chorus, it’s a surprise. And the brainiest of solos, courtesy Larry Carlton.

Any Major Dude Would Tell You That

Steely Dan has a reputation as a dense, difficult band (and they can be that as well, musically at least), but so many of their tunes have moments that belie this; simple, melodic progressions that seem as natural as an arpeggio. The piano figure that follows the chorus in this song is one of them.

Any World (That I’m Welcome To)

“Perhaps I'll find in my head/ What my heart is saying/ A vision of a child returning/ A kingdom where the sky is burning/ Honey I will be there/ Yes I’ll be there”. Their most affecting song. A plea to escape one’s roots, upbringing, neighbourhood, country...who knows, except that it sounds desperate. Those who know their rock history will note that that’s Hal Blaine on drums.

I guess it isn’t the most obvious of pairings, but doesn’t Warren Zevon and Steely Dan together make great sense? Both have a cynical, blackly humourous edge to their writing, both compose jagged pop songs backed by great sidemen. “Sign in Stranger” is typical Dan: genuinely funny, yet also dripping with unsubstantiated menace.

Time Out of Mind

The reason I like this track so much is because a) Mark Knopfler is on it and b) it sounds like everyone concerned must have had a great time making it (a ridiculous assumption, since everything down to the last beat in this song is so meticulous that it must have taken 48 takes and Knopfler threatening to set fire to his guitar before it got done).

very nice template. i also like how your header is obnoxiously big.

Thank you. Not exactly intentional. But I liked the smiley.