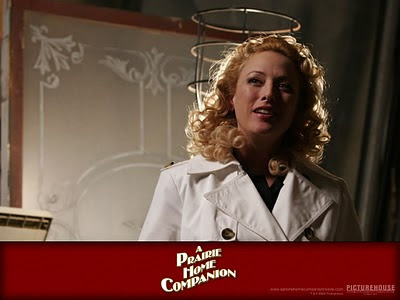 Of all the renegade filmmakers who emerged from Hollywood in the ’70s - Coppolla, Scorcese, Spielberg, dePalma – the one with the least amount of commercial success was probably Robert Altman. Yet, few directors have seen such adulation from amongst their own, and his idiosyncratic influence can be seen in films as varied as Magnolia and Monsoon Wedding. A Prairie Home Companion was his last film (he died the same year it was released), and in many ways, it feels like the final film of a great director – a summation of personal style that also functions as a gently comic look at mortality.

A Prairie Home Companion is an actual radio show that broadcasts from St Paul, Minnesota. It is hosted by Garrison Keillor and features a mix of musical numbers, vignettes and fake jingles. In this film, scripted by and starring Keillor himself, the show is about to be closed down by the sponsors. Ostensibly a behind-the-scenes look at a radio programme, this film is also Altman’s way of orienting us with his views on impending death and how a true artist should deal with it.

Trademark Altman touches - an ensemble cast, overlapping dialogue - lend this film an off-kilter feel that recalls some of his best work (Nashville, McCabe and Mrs Miller). The cast, replete with Oscar nominees, is charming. Meryl Streep, Lily Tomlin, Woody Harrelson and John C Reilly are performers on the show (and do their own singing), while Keillor plays himself. Tommy Lee Jones is a morose corporate hitman and Kevin Kline is hilarious as a cut-rate Raymond Chandler-esque private eye fascinated by Virginia Mardsen, who is credited as “Dangerous Woman”. Watching all these actors bounce off each other, with their constant movement from backstage to live-on-air choreographed as intricately as a dance, one is left to conclude that Altman never lost his powers till the very end.