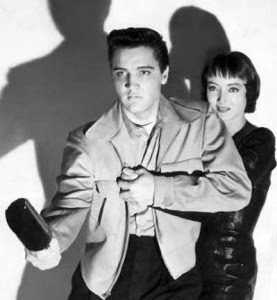 Man with a face like a cherub and a smile like a hustler does a bluesy duet from his balcony. A few minutes later, he’s rescuing a floozy in a bar, wielding off drunks with a broken bottle. He drops the floozy off, resisting her advances at first, then kissing her to prove a point to his gawking schoolmates. To top this manic sequence off, he punches one of them in the face and gets expelled. And this is just the first five minutes of King Creole, starring Elvis Presley.

Elvis movies were never high art, and King Creole doesn’t pretend to be so. But its great low art – imbued with the spirit of noir and offsetting the natural charm of Elvis with a toughness that’s very much of its era. Perhaps the director, Michael Curtiz (Casablanca), was more difficult to influence than the journeymen who directed the later Elvis movies. The musical interludes retain the anarchic energy of Jailhouse Rock; we’re still a few years away from the dreaded Hawaiian movies. And the action, when it comes, is fast and imbued with the spirit of noir.

King Creole has a grittiness that’s very much of its era - it isn’t difficult to imagine Brando or Newman playing the lead (Montgomery Clift was offered the role when it wasn’t a musical). It’s also interesting to note that “king” of the title isn’t Elvis, but Walter Matthau, playing a sadistic gangster. The Elvis of this movie is clearly aimed a notch higher than the teeny-bopper market - he falls for a hooker and mugs his own dad – and he seems believably tough (he looked naive anyway). You wouldn’t want to step on his blue suede shoes.