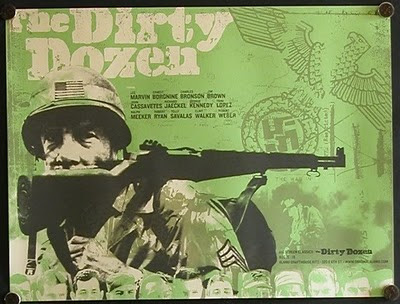 A sincere, if unlikely, tribute to The Dirty Dozen occurs midway through the romantic comedy Sleepless in Seattle. After Rita Wilson has cried her eyes out over An Affair to Remember, Tom Hanks derides it as a “chick’s movie” and invokes Aldrich’s 1967 cult classic. The choice is no accident - Dirty Dozen is the quintessential anti-chick’s movie. It’s also the most anti-establishment war movie to ever come out of a Hollywood studio. 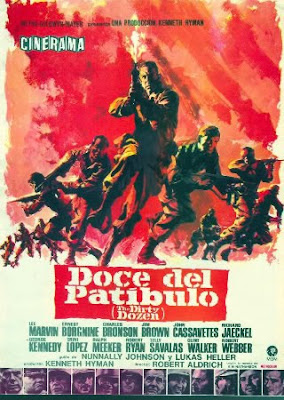 It’s been forty years since the dozen snarled and slouched their way into cinematic history, and while its influence runs deep (the ending of Inglourious Basterds is an unabashed tribute to the “turkey shoot” climax) this two-disc edition is a good opportunity to refresh one’s memory. Even though the story is pure pulp - 12 hardened convicts given a chance to escape their sentences if they agree to blow up a Nazi chateau behind enemy lines - the movie manages to capture the prevailing mood in society remarkably well. In 1967, America was deeply divided over the ugly fallout of the counterculture movement, race issues and the Vietnam War. One can only imagine the heat director Robert Aldrich must have taken for certain scenes, like the one where Victor Franco (John Cassevettes) responds to an order to kill every officer in sight with the question “Ours or theirs?”

If it’s true that a movie’s success lies is its casting, this would be a good case in point. Actors like Charles Bronson, Ernest Borgnine and pro-footballer Jim Brown were a different breed of movie star - ornery and utterly believable as sadists and killers. Lee Marvin plays the tough-as-nails Major Riesman, a role John Wayne rejected for its lack of patriotism. Aldrich also made some fortuitous oft-kilter choices - like the casting of indie legend John Cassavetes, whose anti-authoritarian rants have a joyful exuberance.

Despite a running time of well over two hours, the pace never slackens. Instead, a steady stream of provocation is aimed at every possible quarter – the military, the justice system, women, African Americans, rednecks, homosexuals. The unabashed cruelty of the finale is jarring even today - Aldrich insisted it remain so that audiences were left with no doubt that “war is hell”. Ultimately though, this movie both embraces and eschews realism, playing out like a demented version of Boy’s Own Paper. Special features include an introduction by Ernest Borgnine, a ”making of” featurette , audio commentary by some of the stars and a recruitment video for the US Army with Lee Marvin.