Much ado about masala 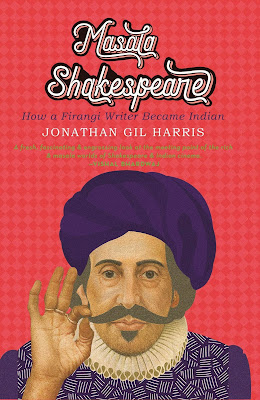 What does Shakespeare have to do with an item number called 'Jhalla Wallah'? Is the Bard more alive in the films of Vishal Bhardwaj and Sanjay Leela Bhansali than on the stages of England? These are the kind of questions you’ll encounter in Masala Shakespeare, a fascinating study of masala film (and some theatre and literature) in conjunction with the plays of Shakespeare. The book, by Jonathan Gil Harris, professor of English at Ashoka University and author of The First Firangis and other titles, doesn’t just list the films that have been adapted from his plays, but also teases out less apparent connections; for instance, comparing the multilingual punning in Hindi film lyrics to the audience-pleasing humour in the plays. But there’s an elegiac edge to Harris’ book as well, a feeling that the idea of masala—or syncretic mixture—may now be dying out. I spoke to Harris over the phone about diversity, his fondness for single-screen cinemas, and his favourite Shakespeare “spot" in a movie.

You write about how watching ‘Lagaan’ in Delhi in 2001 was “profoundly Shakespearean". Were there other such eureka moments?
The Lagaan moment was the crucial one. But there were just a series of eureka moments. Once I got it into my head that there’s something fundamentally Shakespearean about the masala movie, and the experience of the single-screen cinema, it then became unavoidable. Every time I went to the cinema, I would be thinking, this reminds of that particular play or scene. I also became increasingly aware, as Indian cinema migrated into the multiplex, that the nature of movies being made for Hindi-speaking audiences was changing. So what initially may have been a book about the incredible synergy between Bollywood and Shakespeare increasingly became a kind of lament for the passing of a way of thinking and a kind of cinema.

Unlike many others who come to Hindi cinema later in life, you make the crucial point that masala film-making is not a genre.
Yes, very much. This is something I’ve encountered a little resistance over—quite a few people say Harris doesn’t know what masala is, he’s using the term very broadly. It became increasingly clear to me that masala is a way of thinking, a way of relating, and it was crucial to an idea of India that is encountering a great deal of resistance.

I taught a course on masala, and, on the very first day I asked the students to free-associate. It’s amazing what came back—cheap, crass, grotesque, dirty, lowbrow, unpleasant. Masala represents some kind of impurity that makes them all uncomfortable. And so what I’m trying to do with this book is make people a little more comfortable with the idea of impurity, mixture, multiplicity as a fundamental reality in India.

I found the book pleasurably overstuffed, with its digressions and sub-chapters.
Even though I’m an academic, I wanted to produce something that would produce something of the effect of Hindi masala film. I wanted to mix things up, I wanted to make sure the audience didn’t get too complacent with my arguments. I was trying to combine elements of a Shakespeare play, with the five acts, and Hindi films, with the interludes named after songs as sort of item numbers. The question of style was very important to me, because that’s my whole argument with masala.

Not many would associate ‘Jhalla Wallah’, from ‘Ishaqzaade’, with Shakespeare, but you find in its lyrics a parallel to the linguistic dexterity of his language.
So many people say, I love Shakespeare, but when I ask them why, they can’t tell me. They’ve never sat down to have an irreverent conversation with Shakespeare the way they would with a film. So I wanted to give people tools that would allow them to engage much more cheekily with Shakespeare without dismissing the richness of the plays.

I can’t tell you how much I love 'Jhalla Wallah'. I heard that song and I grasped even the first time that there was something about the lyrics that really worked in the context of the film. It taught me how to read the opening exchange in Romeo And Juliet—why the series of puns would have worked for an audience in 1595.

(Amitabh) Bhattacharya, Kausar Munir, they pun across languages with extraordinary wit. And you can see the audience getting it. That’s very Shakespearean and very masala. It’s the one aspect of masala that I think has survived into the multiplex. I keep saying to my students, if you want to find Shakespeare in writing now, look at the lyrics of Hindi film songs.

One of your bolder theories is a comparison of a vocal dip in ‘O Saathi Re’ from ‘Omkara’ and an 11-syllable line in ‘Othello’.
The first time I met Vishal Bhardwaj, I sang 'O Saathi Re' to him. I was struck that the emotional impact of the song is similar to something I was trying to teach my students in Othello, which is listening to doubt in the rhythm of the lines. I said, nothing has helped me teach the acoustics of doubt better than 'O Saathi Re'. And Vishal was very amused. He said, I never thought of it that. It may not have been deliberate on Bhardwaj’s part but because he’s both a storyteller and a musician, his vocabulary has certain uncanny similarities with Shakespeare.

We forget that Shakespeare was a poet as well as a playwright—and a poet in the old-fashioned sense, someone who is communicating with his audience in a way that involves the use of syncopation and cadence and melody. I think that’s why Bhardwaj and Gulzar and Sanjay Leela Bhansali have pulled off such successful adaptations of Shakespeare, because they’re all musicians.

How attuned are you to seeing Shakespeare in a work of art?
I remember thinking early on while watching Dil Chahta Hai, wow, this is really reminding me of Much Ado About Nothing, these three friends for whom heterosexual love is both an aspiration but also an interruption of their bond. Then came a scene in Sydney Harbour where the boat appears with the name “Much Ado About Nothing". I turned to my partner and said, oh my God, because I’d told her about half an hour ago, this is really reminding me of Much Ado.

She got to meet (director) Farhan Akhtar later, so she asked if he was thinking about Much Ado. He said, I haven’t even read it.

Do you have a favourite Shakespeare ‘spot’ in a masala context?
There was one several years back. I was watching Dedh Ishqiya. The sequence where Begum Para is being wooed by the various princes who were doing shayari—I thought, this is Merchant Of Venice, she’s Portia. It was no surprise that Vishal had produced the film and contributed to it.

Towards the end of the book, you write that the masala ethos will “most likely to survive outside the cinema than in it".
I think it has to do with what I call the form of revolution. I think what we’re getting as a result of multiplex cinema, Netflix cinema, are films made for niche audiences, rather than films deliberately made in a mixed style to appeal to a mixed audience. These niche forms can be very nice, but the India of Kapoor & Sons can be a Scottish town. The idea that India is diverse, overcrowded, speaking many languages—that is given very little space.

So one has to look for other venues where that kind of plurality may have some currency. I’m seeing it in theatre. There has been an interesting turn in recent years. When I first came here the theatre students would do beautiful versions of Western plays. Students that don’t like masala films are very interested in indigenous forms like nautanki, jatra. Even though their taste in cinema is migrating westwards, they want Indian theatre. I have been able to do some quite experimental theatre with my students, where they’ve taught me a lot about grandparents’ traditions. I found them more open to doing masala conversations with Shakespeare there.

Have you seen a change in the way your students are relating to Shakespeare?
Yes, a big change. When I first came, I think students thought they were more familiar with Shakespeare, because they encountered more Shakespeare in the high school curriculum. Now the students are often a little frightened of Shakespeare because they’ve rarely read them before, but if you give them some tools, they are much more willing to reimagine him from an Indian point of view.

When I was head of the Shakespeare Society of India, we would put on a national drama competition every year, where people would do scenes from Shakespeare. When I first came to India, nearly all the scenes were straight renditions, a little bit like a karaoke bar. The last couple of years, no one does scenes in English, they do them in Hindi, Urdu, Bengali, Bhojpuri. I think that’s very good news. It makes a much more creative and thoughtful and inquisitive engagement with Shakespeare than what the Shakespeare Wallah engagement was.

This piece appeared in Mint Lounge.
Posted by a fan apart at 3:20 AM