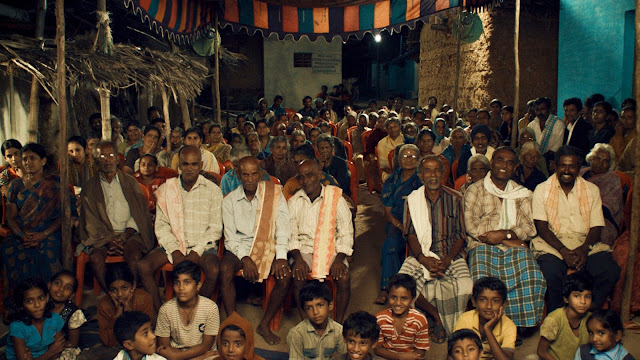 Like the countless sheep that appear in it, Thithi is shorn of fluff. Because the film is so engaging on a minute-by-minute basis, it’s a while before one notices the absence of the usual markers of movie-dom. There are no songs or dances or fights (at least in the accepted sense), no heroes or villains. The cast is made up of non-professionals from screenwriter Eregowda’s village, Nodekoppalu, in Karnataka. There’s no background score, unless you count the constant refrain of bleats and baas and moos and clucks.

It turns out the most movie-like aspect of Thithi is the plot. For a film in which the most compelling character is an aimless wanderer, the narrative meanders very little. Instead, everything is in service of the overarching plot, which concerns the death of a 101-year-old patriarch and the impact this has on his son, grandson and great-grandson. I wonder if Eregowda and the director, Raam Reddy, deliberated on exactly how clever their story ought to be. Too simplistic, and you’re left with a restive audience; too clever, and one becomes all too aware of the screenwriter.

It begins with a death worthy of an Aki Kaurismäki film, with the wizened, lively Century Gowda (Singri Gowda) taunting passersby, then hobbling some distance, keeling over and dying, observed at first by a sanguine cow, goat and dog, before being discovered by a very excitable woman. Soon, the village is buzzing with the prospect of a grand thithi (death ceremony), the responsibility for which falls not on the dead man’s son—a retiree from life who goes by Gadappa (Channegowda), literally “man with beard”—but on his grandson, Thamanna (Thammegowda S). Even as he goes about organizing the ceremony—which, due to Century Gowda’s fame, includes the surrounding villages—Thamanna’s trying to sell his land, which requires faking his father’s death, which in turn requires bribery and the borrowing of a large sum of money.

Add to this the dovetailing stories of Gadappa, Abhi (Abhishek HN), Thamanna’s resourceful son, and the shepherds who arrive on the village outskirts, and it’s no wonder that the plotting becomes very intricate by the end. Yet, any narrative slickness is upstaged by the joyously ramshackle storytelling. The profane and often hysterically funny dialogue is delivered with relish by a visibly amateur cast. Reddy seems to have figured out how to make them relax and enjoy themselves in front of the camera, for whenever a zinger lands (“This is a place where dogs lay eggs” was my favourite) it feels both natural and spontaneous.

That Reddy has managed, in his first full-length film as director, something so controlled yet freewheeling marks him out as special. At times, he shows the sort of trust in viewer intelligence that is associated with the legendary Hollywood director Ernst Lubitsch—the willingness to put two and two in front of the audience and let them say four themselves. In one scene, Abhi, out handing thithi cards, is told by an old man that his great-grandfather was a womanizer, that he’d had more women than he could count. In the next scene, an equally ancient woman animatedly remembers Century Gowda, saying, “He had great physical strength.” Nothing more is said, but on the two occasions I watched the film, the audiences erupted at this remark.

Above all, there’s Gadappa, a gloriously uncooperative comic creation. He’s purposeful, but it’s a strange kind of purposefulness, lacking both motivation and end point. Throughout the film, we see him walk briskly, but with no fixed destination, seemingly unconcerned about everything except the replenishment of his Tiger brandy. Like Chigurh in No Country for Old Men, his relentless forward motion comes with little explanation attached. (“What has to happen, happens,” he says. “No one has any control over it.”) With his wild hair and flowing beard and almost Zen-like inscrutability, he resembles an ancient hippie, his detachedness from everyday life a profound source of irritation for his son, who needs him to commit to “disappearing” so that he can successfully fake his death.

In the wake of this week’s events, it has been suggested that Indians don’t take kindly to jokes about death. Thithi, a comedy about a real death, a fake death and a death-related party, will hopefully prove the exception to the rule.

This review appeared in Mint.
Posted by a fan apart at 1:19 AM