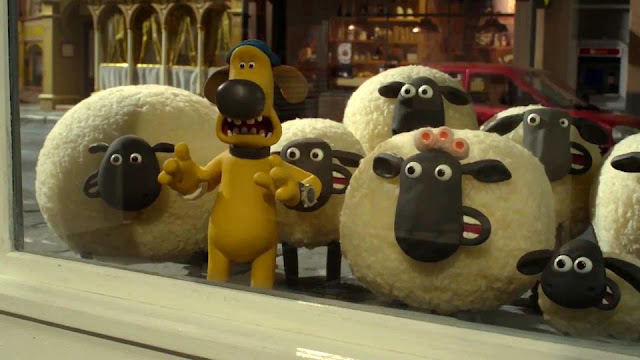 In their modest way, Aardman’s stop-motion animation films achieve a sort of perfection. This isn’t to say that the British production house’s output is particularly original or path-breaking. It’s just that there are few cinematic universes (to use a much abused term) that have functioned with such off-hand charm and given so much pleasure over so many years. Aardman was founded in 1972 but came to wider notice with the Wallace & Gromit series of shorts in the early 1990s. Further success, critical and commercial, came with the release of their full-length features Chicken Run (2000) and Wallace & Gromit: The Curse Of The Were-Rabbit (2005).

Shaun The Sheep first appeared as a stand-alone series on British television in 2007. It has since completed 130 episodes, each 7 minutes long and featuring Shaun, his woolly compatriots, the unnamed farmer, self-important guard dog Bitzer and other denizens of the Mossy Bottom Farm. In Shaun The Sheep Movie, directors Richard Starzak and Mark Burton smoothly transfer Shaun’s impish, enterprising personality to the big screen. Wearying of the farm routine, Shaun hatches a plan to escape for a little holiday. As usually happens in an Aardman film, one thing after another goes wrong, and the farmer finds himself in a caravan headed to the big city, with Bitzer in pursuit. With no one there to look after the farm, Shaun heads off to the city himself in search of them.

A large part of Shaun The Sheep Movie’s charm lies in the fact that this is, for all practical purposes, a silent comedy. Though there’s a busy soundtrack of bleats, bangs, thuds, barks, howls and mumbles, there is no actual dialogue. The comedy is visual, rendered in Aardman’s signature stop-motion style, blending puppets with animated, sometimes actual backgrounds. Because one can only convey a limited range of emotion through the puppet faces, the directors must indicate the characters’ feelings the way Buster Keaton or Charlie Chaplin did in their day—through body language, posture, little gestures. Starzak and Burton achieve this with minimum fuss, moving from one slapstick situation to another, and only occasionally stopping to convey the sadness of sheep—albeit fairly independent, self-reliant sheep—without a shepherd.

None of this is to suggest that the film is in any way self-important or inaccessible. Rather, its silliness is invigorating—the climactic chase has a flock of sheep, two dogs and a farmer inside a horse that’s actually a motor car, The narrative isn’t quite as developed as in Chicken Run: this is essentially a series of set-pieces knitted together. But when set-pieces are sold with this much energy and goodwill, who could possibly resist?
Posted by a fan apart at 3:42 AM