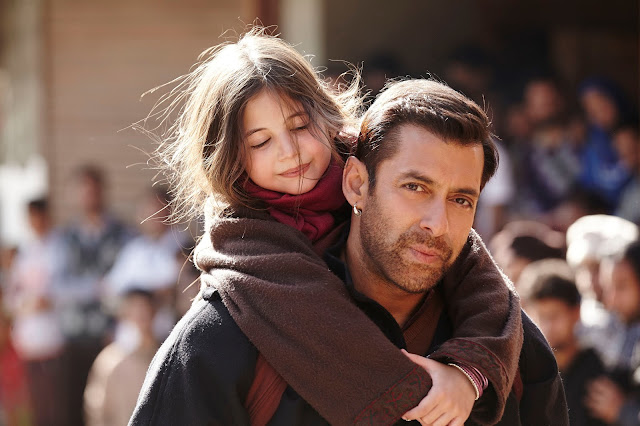 To say Bajrangi Bhaijaan is geared towards maximum emotional impact is an understatement. It is engineered for it. Its parts have been carefully assembled so as to make you laugh every other scene, tear up every 10 minutes. One normally gets this kind of emotional walloping with a Rajkumar Hirani film, but Bajrangi Bhaijaan hits harder because its instruments are more blunt. Who says you need a girl and a gun to make a movie? This film proves that you only need the former, provided she’s a criminally cute six-year-old.

On the way back to her home in Pakistan from Delhi, a young, speech-impaired girl (played by Harshaali Malhotra, a year older than her character in real life) is separated from her mother. She ends up on a train to Kurukshetra, where she attaches herself to slow-witted, good-natured Pavan Kumar Chaturvedi (Salman Khan), known as Bajrangi because of his extreme devotion to Hanuman (to the extent that he folds his hands whenever he sees a monkey). He names her Munni, takes her to his sort-of fiancée’s house (an excuse to draft Kareena Kapoor, as Rasika, into the film) and spends the next few days slowly coming to terms with the fact that Munni, who refuses to leave his side, is Muslim, and from Pakistan.

After Rasika’s xenophobic father tells him he won’t allow a Pakistani to stay under his roof, Bajrangi realizes he has to get Munni home. He tries to hand her over to the Pakistani embassy, but that plan falls through when a riot breaks out. He pays a travel agent to sneak her across the border, a decision that almost gets her sold into a brothel (which in turn allows Khan to let off some steam and break stuff). That’s when he finally decides to take her across the border himself and find her parents.

At around half-time, the film seems to be in danger of overusing its trump card—cutting to a plaintive look from Malhotra. But then Nawazuddin Siddiqui appears and performs one of his famous interventions (he’s done this before, in The Lunchbox and Kick, turning up some way into the film and booting it into another gear). Here, he plays a Pakistani TV reporter who takes it upon himself to help Bajrangi find Munni’s parents and evade the authorities, who, not unreasonably, think our god-fearing hero is an Indian spy. As is often the case with Siddiqui, it seems like he’s improvising most of his lines, though it’s more likely scripted material that his delivery is lending crackle and bite to. At any rate, it’s a relief, both for the audience and for
Khan, who recedes into the background for a spell and allows Siddiqui to crack wise.

With every film he has made after the intriguing Kabul Express, director Kabir Khan has dissociated himself a little more from reality. Bajrangi Bhaijaan seems to suggest that he has finally bid the real world goodbye and entered the Bolly-verse, a mythical place where an Indian can easily navigate his way around Pakistan without currency, passport or visa. No wonder the Pakistani censors passed the film—it’s the most flattering portrait of the country to ever come out of India. Border officers let them through without a visa; a kindly maulana provides them shelter and an escape plan; even the hard-bitten police officer has a change of heart and helps Bajrangi get home. And wait till you see the orgy of goodwill that is the film’s ending.

It isn’t surprising that Bajrangi Bhaijaan goes out of its way not to rock the boat. I don’t think it is overly cynical to think of this movie as a brilliantly orchestrated PR campaign for its star. Bajrangi is devout, polite, truthful to a fault, almost childlike in his enthusiasm. That typical Salman Khan roguishness is missing—this is the kind of boy you want to take home to your conservative father (as Rasika does). Every few minutes, someone tells him “Tu bohot accha insaan hai”, or “Tum dil ke bilkul sachche ho”, or something similarly complimentary. This film is like a giant character witness, making a case for Good Samaritan Salman and then asking: “Do you really think someone this lovable should be in prison?”

It should be obvious that any film whose recurring musical refrain is “Tu dhadkan, main dil” isn’t operating on any kind of subtle level. Though this is probably the best Salman Khan film since Dabangg in terms of directorial competence and narrative novelty and some good old-fashioned giving-a-damn from the actor, it’s also—even by Bollywood standards—a particularly transparent appeal to audience sympathies, playing on our collective weakness for children in peril, for heroes with hearts of gold, for pronouncements of India-Pakistan and Hindu-Muslim harmony. Whether you’re a sceptic or a fan, it’s almost impossible to withstand Bajrangi Bhaijaan’s calculated emotional assault. But it’s also tough to shake the feeling that you’re being played.

This review appeared in Mint.
Posted by a fan apart at 12:22 AM