Wrote this for GQ's July issue. 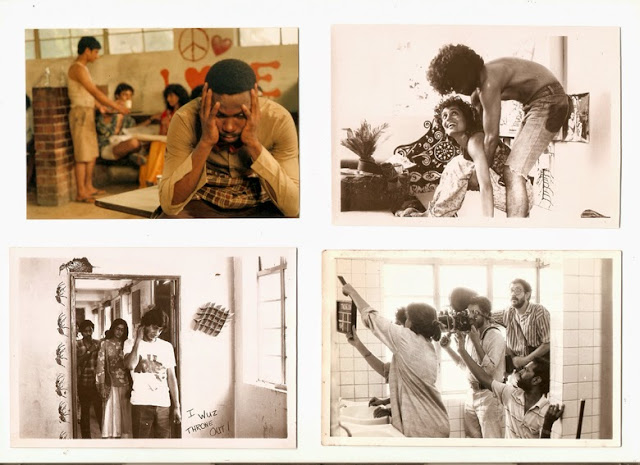 The first time people saw In Which Annie Gives It Those Ones was also the last time many of them saw it. It screened late one night on Doordarshan in March, 1989, never released in theatres, and despite winning a National Award, was soon forgotten. Then, in 1997, its screenwriter won a Booker, and people grew curious about the film which Arundhati Roy wrote and starred in. Today, Annie has acquired an unlikely cult status, but even so, discussions tend to revolve around Roy or the fact that this was Shah Rukh Khan’s first big screen appearance. Very few get around to appreciating the idiosyncratic pleasures of one of Indian cinema’s best college films.

Roy based the screenplay on her student days at Delhi’s School of Planning and Architecture. Her husband Pradip Krishen, who by then had made a couple of documentaries and a feature, Massey Sahib (1985), in which Roy played a village girl, was director. The film concentrates on a bunch of fifth-year students from SPA working (though not very hard) to submit their term-end theses. Though the film’s centre is jointly occupied by feminist Radha (Roy) and spaced-out slacker Anand ‘Annie’ Grover (Arjun Raina), it’s the gallery of supporting players – all vividly sketched and realised perfectly by an amateur cast – that transmits the feel of an actual hostel. We only spend a few scenes each with Mankind, Paapey, Kosozi, Arjun and Lakes, but by the end, it’s like we’ve known them for years.

Then there’s Yamdoot, the ostensible villain of the piece, and a character who seems more sympathetic every time I watch the film. Smartly played by Roshan Seth (the one well-known name in the cast), professor YD Bilimoria may be a sour bastard, but he’s the same sour bastard to everyone, whether topper, poser or burnout. I’ve always loved the scene where he bails Annie and his bar dancer girlfriend out of prison in the middle of the night – not only because it hints at the fundamental decency lurking beneath his sarcastic hide, but also because we learn that this forty-something professor lives at home with his mother, who tells him to wear his half-sleeve vest if he’s planning to go out.

Yamdoot’s clashes with Radha over her thesis are obviously intended as a jab at the soullessness of our education system. Yet, it’s always seemed to me like Radha’s talking through her hat (quite literally, in one scene), while Bilimoria is simply trying to get a bright student to defend her ideas. I’m not sure if Roy intended to play Radha from the beginning, but in many ways the character is a rough draft for the idea of ‘Arundhati Roy’ – that heady mixture of eloquence, opportunism and conscience. Here, in her loose-fitting clothes and long earrings, she cuts a singular figure; the kind of girl whose opinions you may not have shared but were nevertheless fascinated by in college.

Even though Annie was made in 1988 and set in '74, it holds up remarkably well. The hostel life shown here isn’t very different from my own memory of college: extended lull periods broken by bursts of panicked activity. Most of the dialogue is in English, but it’s the sort of English spoken by Delhi kids – mixed in with Hindi and Punjabi and a Haryanvi twang (Delhi Belly would do the same, years later). The rituals of hostel life – the last-minute cramming, the copying of old projects, the friendships with canteen boy and guard – are built into the script’s DNA. And these small touches are what linger on, long after one’s forgotten whether Annie got his head in the game long enough to make a coherent presentation and graduate.

We know what happened to Roy after the movie. What of the others? That dorky guy with centre-parted hair and a high voice became one of Bollywood’s biggest stars. Raina trained at the International Centre for Kathakali and taught at the National School of Drama. Raghubir Yadav, billed as ‘Cycle Cheapskate’, went on to become one of the greatest character actors of his generation. After directing Electric Moon in 2002, Krishen left the movies for a career as an environmentalist, writing the seminal Trees of Delhi. Producer Bobby Bedi coaxed life into tough-sell projects like Bandit Queen and Fire. And Himani Shivpuri, very funny as Annie’s girlfriend, became a popular TV star and movie bit player.

Though there’s a grimy print up on YouTube, a proper DVD release would go some way in aiding the rediscovery and reassessment of Annie. Along with English, August (1994), it’s a precursor to the multiplex films that would pop up two decades later. There are theses waiting to be written on its place in the college film, slacker film, Delhi film and stoner film pantheons. But no matter how much one theorises about the film, its greatest pleasures will always be the incidental ones: the lo-fi instrumental covers of Beatles songs on the soundtrack; Annie calling out “Aa aa aa” to his beloved hen; a hard-won make-out session interrupted by a falling Ugandan in a yellow helmet. Like Roy’s breakthrough novel, In Which Annie Gives It Those Ones finds God in the little details.
Posted by a fan apart at 2:01 AM

Stumbled on this and your notes reflect my thoughts about this wonderful film. I saw it on its initial Doordarshan broadcast and thought about it for years until I had the chance to see it again on the grimy print you mention on Youtube. Today, typing the title again in Youtube i was delighted to see that someone has uploaded a cleaned up print of the film which he states is 'Digitally Remastered'. It was like watching the film again anew! Date of upload 24th July 2015.

Oh wow. Just saw it myself. You're right - this is like a new film. So strange. I wonder if Pradip knows about it.