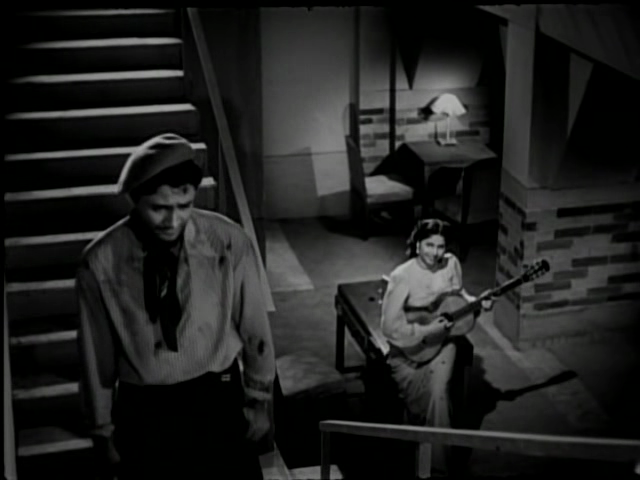 What do we love when we love Guru Dutt? Most people simply love the films – Mr and Mrs 55 and Pyaasa and Kagaz Ke Phool. Some direct their affection more specifically; at Abrar Alvi's writing, perhaps, or the idea of Dutt as a self-defeating romantic. Myself, when I say I love Guru Dutt, what I actually mean is that I love VK Murthy.

The only time I saw Murthy, who died last week at age 90 at his home in Bangalore, was when he travelled to Delhi in 2010 to accept the Dadasaheb Phalke Award. This is the highest cinematic honour in the country, and till then had only gone to actors, directors, producers and musicians. Not only was Murthy the first cinematographer to be given this honour, he was also the first awardee from any technical department. It’s fitting that he was the one to break this glass ceiling, for he was the only Indian cameraman whose name transcended the narrow boundaries of cinephilia. Put another way, a regular cinemagoer who’s never heard of Subrata Mitra may just have heard of VK Murthy.

His early years were spent learning the violin, watching movies for free courtesy a cousin who worked as an accompanist for silent films, briefly taking part in the Quit India Movement and learning cinematography at SJ Polytechnic in Bangalore. In 1947, he got a job assisting the great Fali Mistry, first at Laxmi, then at Famous Studio. It was there, on a film called Baazi (1951), that he got his big break. V Ratra, cousin of the film’s star Dev Anand, was the lead cinematographer, but Murthy – as he recalled in an interview with Raqs Media Collective – was doing “lighting, camera placement, operation – everything”. One day, the director, a moon-faced former roommate of Anand’s, was pondering over a camera angle for “Suno Gajar Kya Gaaye”. Murthy offered an elegant solution, the shot was successful, and the director – unknown but utterly ambitious – sought Murthy out and told him that they’d work together on his next film. And so it was that a 16-second shot in a little-remembered song in a minor film launched the twin legend of Murthy and Guru Dutt.

True to his word, Dutt hired Murthy as lead cameraperson on Jaal (1952). As in Baazi, there’s a strong noir feel to the lighting in this film, with large portions of the screen shrouded in darkness and patterned shadows everywhere. Aar-Paar (1953) was both a continuation and an improvement: Murthy’s increasing mastery of light and shade transforms one basic chase sequence into a mini-masterpiece. Murthy’s other great glory was the song sequence. In “Yeh Raat Yeh Chandni” from Jaal, the camera practically sighs as it dollies toward and away from Dev Anand and Geeta Bali. And the dramatic tracking shots at the beginning of “Babuji Dheere Chalna” in Aar-Paar are a precursor to the mujra in Sahib Biwi Aur Ghulam, one of the great dance sequences in Indian cinema. Murthy attributed his success at filming dance to his musical training, though Dutt’s background as a choreographer probably came in handy as well. 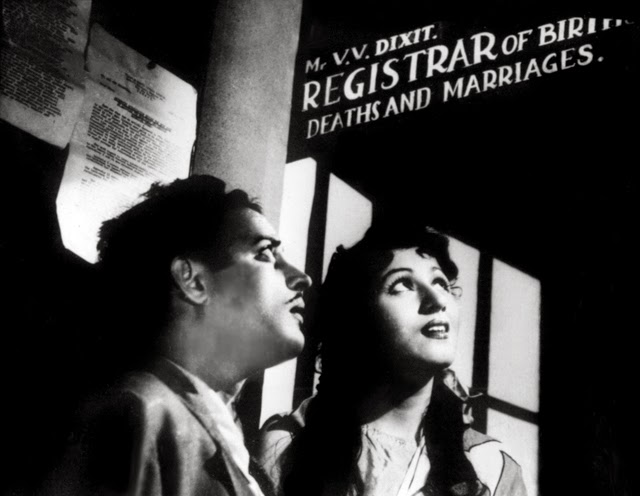 While rushing through the Jaal shoot, Guru Dutt told Murthy that he’d soon do a film for the two of them, which Murthy could take his time over. That film turned out to be Pyaasa (1957), which established Dutt as the world-weariest hero of all time and Murthy as Gregg Toland to his Orson Welles (though there’s more Robert Krasker in his approach). There are sequences to admire in Pyaasa, and there are sequences to fall in love with: the barely-lit scene by the railway tracks, the haunting images of “Duniya Agar Mil Bhi Jaye Toh Kya Hai”, the dramatic resurrection of Dutt at the end. It could have been a career high for both men, but there was more to come.

Get any two Murthy fans talking and chances are the conversation will veer towards a breathless discussion of ‘that shot’. It occurs during the “Waqt Ne Kiya Kya Haseen Sitam” sequence from Kagaz Ke Phool (1959), when Dutt’s director meets his protégé and unrequited love Waheeda Rehman in an empty studio. The song starts out in near-total darkness, but then a strange beam of light shines down and falls between the two, emphasising their separation. (Murthy achieved the effect with two mirrors; one outside the studio to catch the light, the other bouncing it towards the floor.) In a moment of wishful fantasy, their shadows walk towards the beam. Murthy then binds the characters in a brief, heart-rending 180-degree pan, before reality intrudes and they walk away from each other. It’s one of the greatest cinematic what-ifs ever filmed.

In Nasreen Munni Kabir’s 1989 documentary In Search of Guru Dutt, Murthy relates how their signature look became so popular that other directors asked him to shoot in ‘Guru Dutt style’. But was the style Dutt’s or Murthy’s? The answer to this sort of question is usually found in the director’s films with other cinematographers, but Dutt never made a film without Murthy (if one counts Baazi as a Murthy film that Ratra got credit for). And Murthy’s work with other directors is a mixed bag. His colour films for journeyman Pramod Chakravorty are understandably uninspired. On the other hand, Raj Khosla’s C.I.D (1956) has some beautiful outdoor photography, while Tamas, a 1987 mini-series by his former student Govind Nihalani, utilises his penchant for dark hues and filming movement.

Ultimately, Murthy needed Dutt’s vision as much as the director needed his eye. In his declining years, interviewers would ply him for details about how Dutt ‘really was’, and he’d trot out the same answers he’d always given. Perhaps he understood that their stories would always be intertwined, like Ingmar Bergman and Sven Nykvist, or Alfred Hitchcock and Robert Burks. As he admitted in Kabir’s film, one of his first thoughts upon hearing of Dutt’s death at age 39 was “My technique is also gone with him.” Luckily, it hadn’t. Whether they know it or not, every time someone’s thanking Guru Dutt, they’re also thanking VK Murthy. 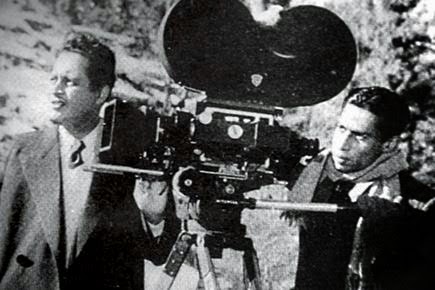 This is a slightly expanded version of a piece that appeared in BLink.
Posted by a fan apart at 11:12 PM