We never thought we’d say it, but we’re suddenly jealous of those who haven’t seen Sai Paranjpye’s Chashme Buddoor. At least they have the option of dismissing David Dhawan’s remake as a painfully unfunny comedy and not, as anyone who’s seen the 1981 film would, as the desecration of a classic. Gone is the innocence, which is hardly surprising. Gone too is the wit, the subtlety, the idea of comedy arising out of everyday life. All that’s left is the basic story – three roommates falling for the same girl – and the title with one vowel altered. 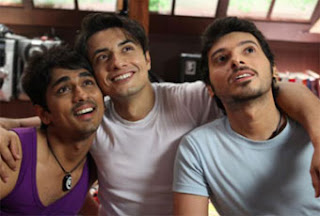 Though the setting’s been shifted from Delhi to Goa, Chashme Baddoor still centres on two roommates who are lying skirt-chasers and a third who’s a serious sort. This time around, the never-been-kissed character, Sid, is played by Ali Zafar – a strange bit of casting, seeing as this particular actor could wear an anorak and a bald wig and still not be short of female attention. We wait while his roommates, Omi (Divyendu Sharma) and Jai (Siddharth), try their luck with Seema (Taapsee Pannu) first. Since Omi deals in bad poetry and Jai in what can only be called bad acting, they strike out. All that’s left is for Seema and Sid to fall for each other and the film to grind on pointlessly for another hour.

Chashme Baddoor doesn’t as much tickle your ribs as poke them every five seconds with a bony finger, to ask “Why aren’t you laughing yet?” There are several conceivable reasons. One, the clowning of Sharma and Siddharth is so broad, it makes Govinda look like Buster Keaton. Two, there’s a ton of rhyming dialogue, a worrisome throwback to the days when Indian directors used this device for cheap laughs. Three, a heavily tattooed Rishi Kapoor (in the Saeed Jaffrey role) is hardly credible as a Goan Christian. Four, not the slightest effort is made to integrate popular gags from the earlier film – the Chamko washing powder demonstration, for instance – into the fabric of this one; they’re just lifted and inserted wholesale, a lazy attempt to appeal to people’s memories of the original.

A lot of unfair comparisons might have been avoided if this film had not been branded an official remake. One would not, for instance, have to pit the four young leads of Baddoor against Buddoor’s sublime quartet of Farooque Shaikh, Deepti Naval, Rakesh Bedi and Ravi Baswani. It’s a no-contest, though Zafar is at least watchable, something that cannot be said for either Siddharth or Sharma. Pannu, whom Tamil cinema fans might remember from Aadukulam, spends most of the movie as a fetching smile and a pair of legs (she comes to life towards the end, when she has less grinning and more scolding to do).

We will not expand on how tasteless some of the dialogue (by the duo Sajid-Farhad) is, except to say that when one character is approached by an emaciated beggar, her response is to praise his “willpower” and remind herself to go on a diet. Our only takeaway from the movie is on the signboard outside the café Rishi Kapoor’s character runs. “Nostalgia”, it says, and we’d advise you to give in to that emotion and watch the original film, re-released on the same day as its pale shadow.
Posted by a fan apart at 9:48 AM