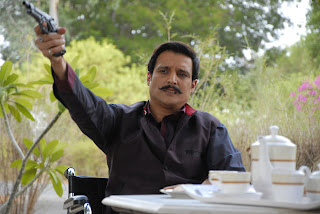 Aditya Pratap Singh, ruler of a princely state in UP, ended Saheb Biwi Aur Gangster pretty much in the dumps. By the time this sequel begins though, he’s bounced back admirably. He’s still wheelchair-ridden – the outcome of a shootout with his wife’s lover – but he’s tipped to start walking within a year. He’s back to pulling political strings, even as Madhavi (Mahie Gill), his wife, turns into an absentee MLA and raging alcoholic. Saheb also has plans to get himself a second wife, someone who’s less likely to seduce the driver and plot his murder, as Madhavi did in part one.

If you’re worried that director Tigmanshu Dhulia might have exhausted the possibilities of royal family subterfuge in the first film, have no fear. Saheb Biwi Aur Gangster Returns has plot enough for three films. First off, there’s the new Gangster, Indrajit Singh (Irrfan), a small-time operator and thug. Indrajit is in love with Ranjana (Soha Ali Khan), the same person Saheb has managed to get himself engaged to. Ranjana’s father, smarting from being made to allow his daughter to go live with an already-married man, asks Indrajit (his employee) to ruin Saheb. Madhavi too wants her husband weakened, but not killed; she turns to Indrajit for help. Indrajit has his own complex revenge agenda; but in the meantime, he might be falling for Madhavi, even as he risks life and limb to meet Ranjana in the haveli. You should spend the interval making a flowchart.

Yet, if you like being hurtled from twist to twist, Dhulia’s film is a fun ride. The writing is sharper than the earlier film, and there are frequent flashes of humour, such as Saheb telling Ranjana’s father that he, a royal, “can afford an extra wife”, or a drunk Madhavi tossing her husband’s new fiancée around on the dance floor. Like in Dhulia’s Paan Singh Tomar, it feels like the ends of certain scenes have been lopped off, which gives the film a blistering pace and the viewer little time to think. This works in the film’s favour, though, because when you actually start to examine character traits and actions, they don’t always match up.

Shergill, very assured in part one, is even better here. What he really needed was a worthy rival. Indrajit, despite Irrfan’s best efforts, isn’t in the same league. After the brute force of Randeep Hooda as the earlier Gangster, it might have been to this film’s advantage to have someone who’s more of a strategist, able to out-think Saheb. But Gangster can’t even outwit Biwi, who ends up providing the film’s motive force. This means an inebriated Mahie Gill gets a third of the screen time, which is a pity. We love an angry Mahie, but a drunk, pathetic one just makes us sad. More effectively conveying the film’s themes of decay and nostalgia is the sepia-toned cinematography by Yogesh Jani.

Tell Me The Locations said...