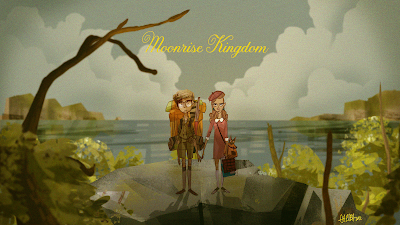 Moonrise Kingdom is Anderson’s seventh feature, and his return to live action after 2007’s The Darjeeling Limited (the stop-motion Fantastic Mr Fox came in between). Susie (Kara Hayward) and Sam (Jared Gilman) are New England teens who decide to run away together, she from her distracted, eccentric parents, he from a boy scouts troop. They go on the lam, camping, fishing and falling in love. On their trail is Scout Master Ward (Edward Norton) and his Lord of the Flies-like troop, policeman Captain Sharp (Bruce Willis), Suzy’s lawyer parents (Bill Murray and Frances McDormand) and Social Services (Tilda Swinton). 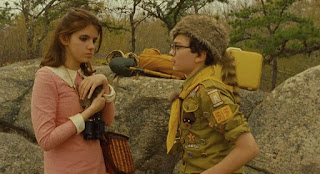 Despite the young leads at its centre, this is a decidedly adult film. In fact, for all the Andersonion whimsy that surrounds them, it’s difficult to recall a film in which two children have been so utterly – most probably clinically – depressed. Suzy and Sam are less teens than troubled grown-ups in microcosm. It’s easy to imagine them as younger versions of characters from other Anderson films; Suzy, for instance, might easily grow up to be wistful, unsmiling Margot from The Royal Tenanbaums. Or perhaps they’d grow up to be Wes Anderson, who grew up in Texas in the ’70s, but nevertheless populated this film with references from his childhood. 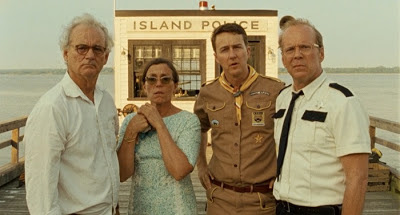 The worlds Anderson creates are so fascinating that it’s possible to simply sit back and admire the little details. Why would think of pairing Benjamin Britten and Hank Williams on a soundtrack? Is the lightning storm at the end deliberately made to look like colourised early film? The best thing about Moonrise Kingdom is that even if you don’t care about questions like these, there’s a good chance you’ll still be moved by the sweet, sad story of two kids, wise beyond their years, trying to escape their mixed-up lives. Watch out for Willis, supremely gentle and moving. The DVD has a solitary extra called “A Look Inside Moonrise Kingdom”; it’s a very, very brief look.

This review appeared in Time Out Delhi.
Posted by a fan apart at 10:52 PM