As 2012 draws to a close and critics across the country start slotting the year’s releases into hits and flops, good films and awful ones, here’s a year-end list with considerably smaller ambitions. Instead of looking at the year in long shot, as it were, I’m going to do an extreme close-up. Here are a handful of moments which, for me, best represent what Bollywood’s been up to these past 12 months. Some are stand-out scenes in bad films, others disappointing interludes in good ones. For one reason or the other, these are likely to be the little details that come to mind when I look back on Hindi cinema in 2012. (Unlike the makers of Barfi!, I’d also like to acknowledge upfront my debt to Richard T Jameson and Kathleen Murphy’s yearly column ‘Moments Out of Time’, whose structure I’ve borrowed for this piece.)
Irrfan Khan training his would-be dacoits in Paan Singh Tomar, reminiscent of similar scenes in Bandit Queen. Tomar’s director Tigmanshu Dhulia was in charge of casting on Shekhar Kapur’s film. 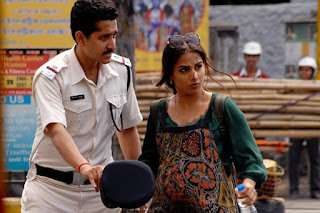 The touching concern shown by Parambrata Chatterjee’s young cop towards the very pregnant Vidya Balan in Sujoy Ghosh’s Kahaani. The ordinariness of Bob Biswas, insurance agent and serial killer. The use of the city of Calcutta as a character in itself. If this was the year of the Bengali director in Bollywood, Kahaani was the first blow delivered.
The camera gazing voyeuristically at Manoj Bajpayee taking a bath in Gangs of Wasseypur I; a neat reversal of the traditional ‘bathing beauty’ gender roles in Hindi cinema.
A mother pointing out to her daughter the man she once loved but gave up – the precise moment when one realised that Barfi! wasn’t a tribute but a rip-off. Stealing silent movie gags is all very well (The Artist got five Oscars for it), but who steals from The Notebook?
The ‘Raabta’ sequence from Agent Vinod. This flawlessly executed, intricate, unbroken shot – clocking in at 3 minutes and 22 seconds – was the set-piece of the year. Saif and Kareena dodge a motel-full of assassins as the camera weaves its way around arguing couples, blind piano players and baby strollers with machine guns in them.
The year of the chameleon: Nawazuddin Siddiqui as a cop in Kahaani, a mafia boss in Gangs of Wasseypur and a freedom fighter in Chittagong. (He was also in Miss Lovely and Patang, both of which did the festival circuit rounds, and will play a pivotal role in the much-anticipated Talaash.)
Annu Kapoor in Vicky Donor, delivering the weirdest history lesson in ages, one that relates Alexander the Great and Partition to sperm count. Plus, a new high: Mummyji and Dadiji sitting in the dark and drinking whiskey. 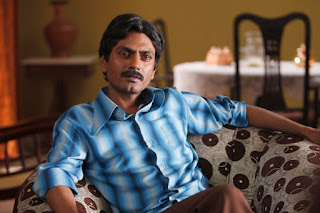 Run, run, run: Joginder Parmar sprinting for his life, CPU clutched to his chest, in Shanghai; Perpendicular skidding through the narrow lanes in Gangs of Wasseypur II; Paan Singh Tomar running for a country that wants his medals, not his problems.
The two most anti-feminist, say-it-ain’t-so decisions of the year: Parineeti Chopra forgiving Arjun Kapoor for taking advantage of her in Ishaqzaade; a betrayal by the film of its only appealing character, and of Chopra’s thrilling defiance up to that point. A close second: Deepika Padukone deciding that she needs to become a Bharatiya nari to win her love back in Cocktail.
Films with exactly one successful joke: Ek Main Aur Ekk Tu, with a bemused Imran Khan sitting through a job interview in Japanese; Fatso, where heaven is a red tape-riddled, error-prone government office; Rowdy Rathore, in which Akshay Kumar ‘rewinds’ Sonakshi Sinha walking by; Kya Super Kool Hain Hum, just for its title (will they add a ‘duper’ for the sequel?).
Abhay Deol in Shanghai, praying as his laptop plays ‘Vishnu Sahasranamam’. Also, from the same film, Farooque Sheikh’s reading of the line “Haathi ho tum. Insult nahin bhoolte”.

Roshan Seth, a bulldog and a haggard-looking Salman Khan in a bags-under-the-eyes conversation for the ages in Ek Tha Tiger. If Khan was losing sleep over the opening, he shouldn’t have. Ek Tha Tiger’s earnings (250 crores and counting) will probably see him end this year as he’s done the last three – the star of the highest-grossing film. (The fact that Ek Tha Tiger, Bol Bachchan, Rowdy Rathore and Housefull 2 – all panned to various degrees by reviewers – were some of the top money-earners this year tells its own little story about the gap between critical opinion and public taste.)
Best use of soundtrack in 2012: The unexpected change from ominous strings to the gentle rain of Sneha Khanwalkar’s ‘Moora’ in Gangs of Wasseypur II. It’s an indication that even though he has a bullet in his leg and gunmen desperately looking for him, Faisal Khan’s hard day’s night will soon be over.

This piece appeared in GQ's year-end issue. It was written a while back, but nothing especially compelling has happened since then, with the exception of Luv Shuv Tey Chicken Khurana. If I sat down to write it today, the list would mostly be the same.
Posted by a fan apart at 11:13 PM