Meet Samar. Like most penniless Indians in London, he sells fish, waits tables and sings Punjabi folk songs to survive. Meet Meera. She’s a rich girl, prone to making deals with Jesus in empty churches. They meet, and because they’re Shah Rukh Khan and Katrina Kaif, they fall in love; never mind that she’s engaged, or that he comes on like Clark Gable (“If I kiss you, will you slap me? I don’t think so”). Then, just when she’s about to leave her fiancé for a penniless singing waiter, he’s hit by a car. As he fights for his life, Meera makes one of her divine bargains, something along the lines of “Save him, and I promise I’ll never see him again.” (Don’t ask.) At any rate, the god of flawed screenplays intervenes, and next thing you know, Samar is a Hurt Locker-style bomb disposal expert in Ladakh. (Please don’t ask.)

Difficult as it may be to imagine, Jab Tak Hai Jaan, directed by the late Yash Chopra and written by Aditya Chopra and Devika Bhagat, becomes even more implausible in its second half. Suffice to say there’s another accident, a diagnosis of retrograde amnesia and a complex game of pretend suggested by a doctor whose license may need examining. Is this the same Aditya Chopra who wrote Dilwale Dulhania Le Jayenge? It must be, because there’s a scene in a European church, another in a green field with yellow flowers, and a character who gets to say “Jaa, jee le…” But these Yash Raj staples are all the more depressing because they no longer seem genuinely felt. It may sound cynical, but a Hindi film with a climactic speech in English surely has at least one eye on the NRI market. 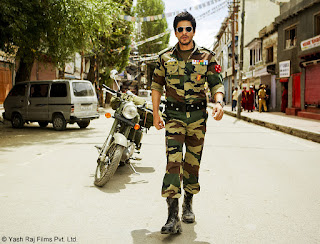 As Akira, a journalist who finds out about Samar’s love story by accident and tags along with his unit for a TV documentary, Anushka Sharma pumps some young blood into a picture that’s badly in need of a transfusion. But despite a few attempts to make the film seem hip (sex jokes, a dance sequence straight out of Step Up), by the end, Khan is reduced to making self-deprecating statements about being an old-fashioned lover. Truth is, it’s not just the 47-year-old Khan (who, it must be said, remains 100 per cent committed throughout) who’s aging. The whole roses-and-eternal-love formula may be past its expiry date.

We’d rather not point out more flaws in Yash Chopra’s swansong. Instead, let’s celebrate what has been a singularly important career. When we reached Delite theatre, a huge crowd had gathered in time for the first show. Banners were up, and the famous Jea Band performed hits from Chopra’s films. It was a good old-fashioned first-day first-show – a small but fitting send-off for a man who’s helped shape Bollywood’s trajectory over so many decades.

This review appeared in Time Out Delhi.
Posted by a fan apart at 10:42 PM

If "Veer-Zaraa" is the sky then "Jab Tak Hain Jan" doesn't deserve any space on earth to consider it as a ground. This is one of most worst love story ever been written by aditiya chopra. Only late yash ji's direction and anushka sharma's flawless acting makes it worth-able to watch it only for one time. Totally disappointing as the expectation was so high...For me it deserves only 1 star out of 5...........