Derek Cianfrance began writing Blue Valentine in 1998, when he was 24 years and one film old. He ended up completing it 12 years later. In the meantime, he got married, had a kid, made documentaries for a living. Though spending that much time on one hard-sell project might have led someone else to quit the business altogether, Blue Valentine is arguably stronger for it. For Cianfrance’s film examines, unflinchingly, the effect of the passage of time on a relationship. 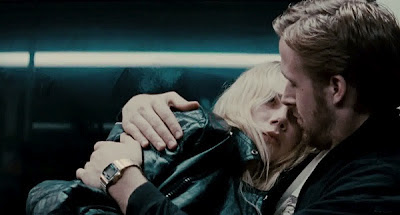 When we're first introduced to Dean and Cindy (Michelle Williams and Ryan Gosling), the husband-wife pair are so irritable with each other, one wonders whether there was any love to begin with. A little later, that question is answered. A parallel strand of the story shows the couple younger by a decade or so, happy, hopeful. As he begins to court her, the film starts to bite into the viewer’s skin. We know how this ends. It’s like watching a ballet turn into a train wreck. It doesn’t help that Gosling and Williams reach within themselves and pull out performances worthy of a Cassevettes film.

It seems pretty unlikely that anyone would allow children to watch a DVD whose cover has “The most provocative film of the year” emblazoned across it. Nevertheless, a couple of sex scenes pertinent to the story have been snipped off. But Blue Valentine remains damaging and dangerous, in ways that simple-minded censors will never get around to understanding. The film gives it to us straight. Love will fade. Familiarity will breed contempt. Ryan Gosling will lose his hair and start looking like a creepy spud. It even punctures that great movie lie, that the memory of love may be enough to save things. This DVD has no special features, though interested viewers should seek out Cianfrance’s interview with critic Elvis Mitchell on the KCRW website.
Posted by a fan apart at 1:04 AM