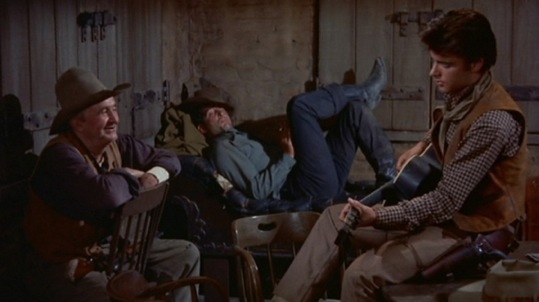 Fred Zinneman’s High Noon is considered one of the great Westerns, but fellow director Howard Hawks was no fan. As he later remarked, “I didn’t think a good sheriff was going to go running around town like a chicken with his head off asking for help.” So Hawks teamed up with John Wayne (who disliked High Noon even more) and set about making the exact opposite of that film. The result was Rio Bravo, a movie about a sheriff who does ask for help – though unlike the Gary Cooper character in High Noon, only from those who are likely to be of use. 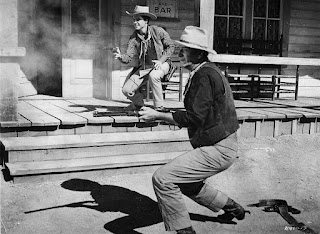 Despite its indignant origins, Rio Bravo is one of the most blissfully entertaining Westerns ever. Sheriff John T Chance (Wayne) is in a tight spot. He’s just arrested Joe Burdette for shooting a man at point-blank range, and knows that Nathan Burdette, Joe’s brother and a powerful rancher, will be looking to bust him out. He also knows the townspeople are either too afraid to help, or too inept to fight. So he assembles a strange posse – his former deputy Dude (Dean Martin), now a recovering alcoholic, an old cripple named Stumpy (Walter Brennan), and the youngest draw on the block, the Colorado Kid (Ricky Nelson). There’s also a seductive cardsharp called Feathers (Angie Dickenson), who Chance can’t intimidate or seem to shake.

Howard Hawks was lionised by the auteurists because his films – no matter what genre – always looked like they’d been made by the same man. Rio Bravo certainly does have that patent Hawks mixture of screwball comedy, sexual tension (male-female and male-male) and economically choreographed action. Yet this film, rated by many as the director’s best, also deviates from the Hawks canon in certain ways. The relaxed fatalism that hangs over the film is miles away from the frantic rhythms of His Girl Friday or Scarface. There’s also a melancholy – especially when Dean Martin is onscreen – that one doesn’t see too often in the director’s films. 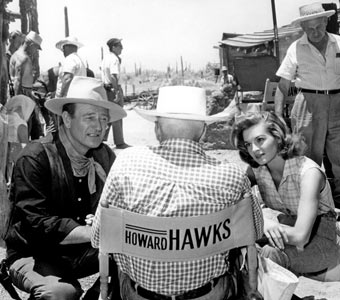 The script was by Hawks regulars Jules Furthman and Leigh Brackett, and the broad-ranging score by Dimitri Tiomkin (to hear “El Degüello” once is to have it haunt your dreams). Dean Martin showed why he was the best actor in the Rat Pack. Pedro Gonzalez-Gonzalez is a caricature of an excitable Mexican, but funny nevertheless, and Angie Dickenson’s voice is so laden with mischief one gets the feeling she scares John Wayne more than the killers. Wayne was already an icon by then; he exudes the confidence of one who’s realised the audience doesn’t expect him to act, but just be himself. A couple of years later, Sergio Leone ushered in the age of the revisionist Western. Rio Bravo thus stands not only as Howard Hawks’ last great film, but also the first “last great Western”. A shorter version of this review appeared in Time Out Delhi.
Posted by a fan apart at 10:03 PM